b. 1 August 1753
Theodosia Holcombe was born on 1 August 1753 at Simsbury, Hartford Co., CT.1 She was the daughter of Nathaniel Holcombe IV and Margaret Cossett.

Did she marry Windsor-Bloomfield, 29 Dec 1777, John Manning? (note that we have two pairs of sisters who may be twins, though the days of their births would seem to be too far apart. All four births are recorded consecutively and the father of the first pair is noted as Nathaniel 3rd, and their older brother was then too young to have children.)

Bowman only lists the possibility of twins Margaret and Ruth. Lydia Holcombe was born on 20 October 1753 at Simsbury, Hartford Co., CT.1 She was the daughter of Nathaniel Holcombe IV and Margaret Cossett.

McPherson lists possibly 9 children but only names 4. Salina's information was from an obituary.

David was probably named fo rhis aunt Abigail Buttolph's first husband, David Saywell, and was doubtless among the unnamed children of his father baptized at First Church, Boston, in October 1675. He accompanied his parents in their peregrinations to Salem and back to Boston, and then to Wethersfield, CT, but died in Simsbury, CT. He was a shoemaker of cordwainer.

In TAG, there is a lengthy discussion of the work done to identify David's wife, and finally McCracken determines:

I now think it highly probably that David Buttolph's wife was Mary Buck, dauhgter of Henry and Elizabeth (Churchill) Buck. It will have been noted that David's brother George married mary's sister elizabeth. The marriage of two brothers to two sisters is hardly a difficult phenomenon to accept. We shall see that David and mary had five children who married five children of nathaniel Holcombe by his wife martha Buell. In a period when population is sparse, it is entirely ntural for young people to marry the siblings of their in-laws.

David Buttolph build in Wethersfield a house which has in recent years been restored to approximately its original state and is now open as a museum known as the Buttolph-Williams House. Sgt. David Buttolph was born on 7 May 1669. He was the son of Lt. John Buttolph and Hannah Gardener. Sgt. David Buttolph married Mary Buck, daughter of Henry Buck and Elizabeth Churchill, after 14 November 1694. Sgt. David Buttolph died on 5 April 1717 at Simsbury, Hartford Co., CT, at age 47.

McCracken notes: Then called 1s dau. in a series of three entries including her two older brothers, children of Nathaniel the younger, mother not stated, but clearly this Ruth was 2nd daughter, as her elder sister Hannah was clearly identified as to both parents' names, and the clerk overlooked Hannah.

Bowman has a note after the 4th child Ruth that "William Holcomb puts Reuben, his great-great-grandfather, b. 1725, here," but Bowman puts Reuben as a son of Lt. David Holcombe, Captain Nathaniel's brother.

Seaver and Bowman show Thankful born 1725 or 1726, but McCracken does not list her. Kathleen Fenton, however, clears up the questions about Thankful and her family.

In 1776, General George Washington feared that Sir William Howe, who was forced to evacuate Boston, would Join his brother, Admiral Lord Howe, and proceed to take New York City. To bolster his limited Continental Troops, General Washington requested that Connecticut send down a portion of her Militia. Answering the call was a company of Granby men commanded by Captain Samuel Hayes. Among the twenty-five enlisted men were Nathan Gillett, his twin brother, Azariah, and their brother-in-law, Consider Holcomb. Captain Hayes Company marched to New Haven and then went by boat to land at Flatbush on Long Island on August 22, 1776 and become part of the 18'th Regiment commanded by Colonel Jonathan Pettibone.

In an 1898 letter from the Adjutant General's Office concerning another soldier in Captain Hayes company, the letter says of Captain Hayes Company that they "contributed to what is sometimes described as the 'panic' at Kip's Bay". On the 15'th of September, Admiral Howe landed a large contingent of British troops on Manhattan at Kips Bay. General Washington was four miles away in Harlem and he rushed to the scene. Washington was infuriated by the "disgraceful and dastardly conduct of the troops" and he was forced to withdraw toward Harlem, barely escaping capture. In hindsight, General Washington should have been aware that these recruits, while generally good marksman, were generally a home guard type force and were more adept at fighting from behind logs and in concealment. Their lack of training in this type of warfare made it difficult to hold ranks and advance on a massive formation of highly trained and experienced British Regulars. As it was, these troops turned in panic and it is estimated that nearly six thousand of the eight thousand Connecticut Militia troops "deserted" and just went home.

Within a few weeks, New York City had fallen to the British and it would remain in British hands for the next seven years. General Washington placed the blame on "too great a dependence on the militia" and demanded better training of short term enlistments. The local militia troops also learned from the experience and their training would make them more effective in future service.

Records for service in American Revolution are sparse and incomplete. Whether Nathan had further service in the Revolution is probable but uncertain. Some of the most telling details of service are contained in pension applications. However, the majority of Revolutionary War veterans were not eligible for pensions until the Pension Act of 1832, nearly fifty years after the war ended. While all of Nathan's brothers had service in the American Revolution, only three lived long enough to apply for pensions. 4


"Starting in 1802, the twins, Nathan and Azariah, begin selling land to their sons. They are getting older and ready to retire. The whole idea is to get rid of all your land before you die and thus have no estate. In 1808, the twins home lot was sold to Eli. Nathan even sold all rights to land willed to his wife in 1811. But that same day, Eli sold his parents house back to his mother. This insures security for Dorcas if Nathan should die in debt (which he did). Again in 1817, in more creative financing, Nathan and Dorcas sold 2 3/4 acres to Truman who sold it back just to Dorcas the same day. Nathan only had personal property and debts when he died. No probate record was found for Azariah." (from a letter by Carol Laun to Norb Bankert).

Information on Lois and the descendants of Lois and Levi is from Rick Ingersoll on www.my-ged.com/db/page/inger; ingersoll@ingersoll.net. He cites the following works:

INGERSOLL : The Ingersolls of Hampshire. A genealogical history of the family from their settlement in America, in the line of John Ingersoll of Westfield, Mass., by C.S. Ripley. 107p. 1893.

Asa was a farmer at Granby and Simsbury. His widow and daughter Chloe are recorded in th 1850 census of Granby, CT living together as a family.

Farewelll my friends
who are alive
Who visit my abode
I wish you all to live in love
And make your peace with GOD.

b. 11 March 1766
Seaver spells it "Appa" on page 48 and "Affia" on page 50; McCracken spells it "Apphia"; all obviouisly the same. Apphia Holcombe was also known as Affia Holcombe. She was born on 11 March 1766 at Simsbury, Hartford Co., CT.3 She was the daughter of Ephraim Holcombe and Dorcas Hayes. Apphia Holcombe married Carmi Holcombe, son of Amos Holcombe and Mary Dibble, on 24 March 1783 at Turkey Hills, Hartford Co., CT.4

b. 19 April 1770
Seaver shows birth as 19 April, McCracken as 13 April. Thankful Holcombe was born on 19 April 1770 at Simsbury, Hartford Co., CT.3 She was the daughter of Ephraim Holcombe and Dorcas Hayes.

He was hired by Daniel Ganies for war service. He moved to Rutland County, VT in 1786, to Grand Isle Coiunty, VT in 1795. SS indicates children Amos and Carmi, while Weir lists all the following children.

McCracken indicates that Seaver showed Dr. Amasa Holcombe as a son of this Elijah. Actually, Seaver shows Amasa, son of Elijah died young, but Amasa, son of Elijah, son of Elijah was the one of whom Seaver wrote of at great length and McCracken mentions at the beginning of his article. Perhaps Dr. Amasa's papers which are in fact at the Connecticut State Historical and Genealogical Library will clear up these inconsistencies.

Bowman lists a second marriage in 1758 to Sarah Evans, but since this is the family of William Frederick Holcombe, the children were probably all listed correctly to Violet.

Elijah was a cooper by trade. They settled at Gillets Four Corners now Southwick Mass. He enlisted May 7, 1775, as a private in the 3rd Co., 2nd Conn. Regt., Col. Spencer, recruited mainly in Middlesex Co., CT from which he was discharged Dec 17, 1775.

Seaver and McCracken do not mention the marriage between Mercy and Moses, but McPherson notes that another name given for him is Moses Dibble.

McCracken does not note this marriage; Bowman does but notes that a Joseph Wilcox married an Elizabeth and had son Joseph, perhaps implying that one or the other could have been this husband. 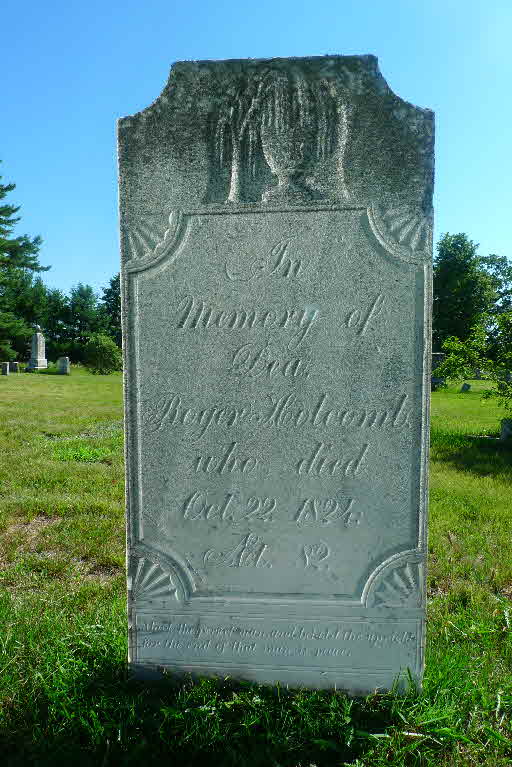 McPherson reports that Roger was a corporal in the 18th regiment of New York militia and that he moved with his family in the company of Azariah and Ruth (Hitchcock) Brown and family from Simsbury to Attica, NY "in the Genessee country." However, Carol Laun shows that this is an error.

This Roger lived his entire life in Granby and is buried there along with his son. The Revolutionary War pension is for a different Roger Holcomb who was born in Wallingford.

McCracken does not note this marriage; Bowman does but notes that a Joseph Wilcox married an Elizabeth and had son Joseph, perhaps implying that one or the other could have been this husband.

McCracken does not mention this child, but does list an unnamed child that died 13 April, 1731. Both Seaver and McPherson include a daughter Ann that may have been this child.

McCracken does not mention this child at all. There seems to be some confusion between this Joseph and Joseph Holcombe (Joseph, Benajah, Thomas). Seaver lists many children with extensive detail while Bowman lists only three children. This text will follow the Bowman lines.


Bowman speculates in an e-mail that perhaps these two Josephs are the same (her #s 676 on page 68 and #8115 on page 69). She had questioned #676 to begin with. But notice the two very different death dates.


Both Joseph and Elizabeth are buried in the Granby Center Cemetery.