Additional information on this family is from correspondence with Wadean M. Holcomb.

Wadean Modell Rohner Holcomb, 95, a Baker County resident for more than 90 years, died Jan. 12, 2017, at Ashley Manor Living Facility with her family at her bedside. Her funeral will be at 1 p.m. Saturday at the Richland Christian Church. Pastor Gordon Bond will officiate. There will be a reception afterward at the church’s Fellowship Hall. Wadean was born on May 1, 1921, at Wingville to William Henry Rohner and Bertha Tanner Rohner. She was raised at Wingville where she learned her hard work ethic on the family farm. Her many outdoor tasks included milking the cows and tending the chickens.
She married George Noble Holcomb on July 12, 1942, at Wingville. They resided at the Holcomb Ranch in Richland where they operated a sheep ranch that later became a full-time cattle ranch. Wadean contributed to the ranch by being a homemaker, which included preparing meals for the lambing crews, keeping a plentiful garden and preserving the harvest. Wadean attended Baker High School and Baker Business College. She studied home economics at Oregon State College (now Oregon State University) for two years. She was a member of the Baker County Garden Club and the Order of Eastern Star, Esther Chapter 11. She was blessed with a keen mind until recent years. Her many interests included her love of gardening and cooking. She was patriotic; the respect and honor she demonstrated to our U.S. military was without waver. In 2012, Wadean’s wish materialized as the John Holcomb Memorial Park was dedicated at Richland. She had a great love for Baker County and considered it “God’s country.” Wadean lived through the Great Depression during her early life and that helped to form her conservative frugal nature and the ideology of saving for a rainy day that she practiced daily.
She was preceded in death by her parents; her husband; and two sons, John Noble and William Dean “Bill.” Survivors include her sister, Gloria Linebaugh of Bend; daughter-in-law, Wanda Holcomb of Richland; three granddaughters, Shannon (Marin) Miller, Gloria (Carlos) Montes and Christy Holcomb; and six great-grandchildren. In lieu of flowers, the family requests memorial contributions to Eagle Valley Ambulance or a charity of one’s choice through Gray’s West & Co., 1500 Dewey Ave., Baker City, OR 97814. To light a candle in memory of Wadean, go to www.grayswestco.com. 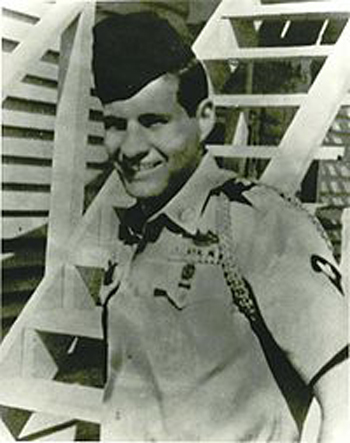 from the History of Baker County, Oregon

"John was outstanding in 4-H activities as well as athletics during his school years at Eagle Valley High School. He attended Eastern Oregon College and Oregon State University. In 1966 John enlisted in the United States Army and upon completion of his basic and advanced training he was ordered to Germany, where he served in the 3rd Armored Division until he was ordered to Vietnam in march of 1968. In Vietnam he was awarded two Bronze Stars with "V" device (for Valor), two Air Medals, Army Commendation with "V" device, Combat Infantry Badge and Purple Heart. On February 16, 1971, his parents and brother, Bill, were presented the Medal of Honor in ceremonies in the East room of the White House for his valorous action on December 3, 1968."

"For conspicuous gallantry and intrepidity in action at the risk of his life above and beyond the call of duty. Sgt. Holcomb distinguished himself while serving as a squad leader in Company D during a combat assault mission. Sgt. Holcomb's company assault had landed by helicopter and deployed into a hasty defensive position to organize for a reconnaissance-in-force mission when it was attacked from 3 sides by an estimated battalion-size enemy force. Sgt. Holcomb's squad was directly in the path of the main enemy attack. With complete disregard for the heavy fire, Sgt. Holcomb moved among his men giving encouragement and directing fire on the assaulting enemy. When his machine gunner was knocked out, Sgt. Holcomb seized the weapon ran to a forward edge of the position, and placed withering fire on the enemy. His gallant actions caused the enemy to withdraw. Sgt. Holcomb treated and carried his wounded to a position of safety and reorganized his defensive sector despite a raging grass fire ignited by the incoming enemy mortar and rocket rounds. When the enemy assaulted the position a second time, Sgt. Holcomb again manned the forward machinegun, devastating the enemy attack and forcing the enemy to again break contact and withdraw. During the enemy withdrawal an enemy rocket hit Sgt. Holcomb's position, destroying his machinegun and severely wounding him. Despite his painful wounds, Sgt. Holcomb crawled through the grass fire and exploding mortar and rocket rounds to move the members of his squad, everyone of whom had been woulded, to more secure positions. Although grievously wounded and sustained solely by his indomitable will and courage, Sgt. Holcomb as the last surviving leader of his platoon organized his men to repel the enemy, crawled to the platoon radio and reported the third enemy assault on his position. His report brought friendly supporting fires on the charging enemy and broke the enemy attack. Sgt. Holcomb's inspiring leadership, fighting spirit, in action at the cost of his life were in keeping with the highest traditions of the military service and reflect great credit on himself, his unit, and the U.S. Army."

Obituary - William Dean Holcomb, 67, passed away on Tuesday, January 20, 2015 in Boise, ID from respiratory failure. A Memorial Service ~ Celebration of Bill's Life will be held on Saturday, January 31, 2015 at 1:00 p.m. at the Richland Christian Church in Richland, Oregon. Interment at Eagle Valley Cemetery. Friends are invited to join the family for a potluck reception to be held immediately following the interment in the fellowship hall at the Richland Christian Church. William “Bill” Holcomb was born in Baker City, Oregon on December 5, 1947 to George and Wadean (Rohner) Holcomb. Bill grew up in Richland, Oregon where he attended Richland Elementary and graduated from Eagle Valley High School in 1966. After high school Bill enlisted in the Army and served in Korea for 3 years.

After his stint in the service Bill married Marti Davis and had three daughters. He pursued an Associate's degree from Blue Mountain Community College in Animal and Agricultural management. During these years, Bill worked in Richland and also at the feed lot in Boardman. He and Marti divorced in the early 80's.

Bill later married Wanda (McAfee-Draze) on November 5, 1990 in Naknek, Alaska. They made their home in Basque, Oregon where Bill was employed by ODOT for 19 years, he retired in 2012. Bill and Wanda moved back to Richland in 2012.

Bill enjoyed many things in life including the outdoors, animals, team roping, ranch and farm work. He especially enjoyed hunting with his wife Wanda and his cousin Noble Keist. Bill had a great smile and big laugh; he always enjoyed a good party.

He was preceded in death by his father George Holcomb and brother John Holcomb.

Thomas grew up in a home where the burning religious issues of the times were discussed. He had two brothers, John, who was educated at Emmanuel College, Cambridge, who became a minister, with "obnoxious views", objectionable to the government, and Israel, who emigrated to New England, probably about 1633. Israel returned to England, about 1643, to support Oliver Cromwell against the crown.


Thomas Stoughton came on the Mary and John in 1630, with children, Thomas Jr., Katherine and possibly his first wife, although she may have died in England. He became a freeman in Dorchester on 18 May 1631 and he served in the General Court until 1634. The same year he was one of ten persons chosen to "order the affairs of the plantation." His first service began on 23 Sept. 1630, when he was chosen Constable of Dorchester. Soon after, he was fined 5 pounds and sentenced to be jailed until his fine was paid, for marrying Clement Briggs & Joane Allen. He did not pay the fine, nor was he jailed, and in 1638 the fine was rescinded. Never the less, he was regarded as a man of "Prominence, property & social distinction," and was referred to as "ancient, which signified Ensign or standard bearer in a military company.


When the religious dissention began in Dorchester, Thomas, along with Henry Wolcott, Mr. Newberry, Roger Ludlow and John Mason, were appointed to establish a new settlement on the Connecticut River, near the Plymouth Trading Post. These men defrayed most of the expenses of the migration, and the new plantation. This settlement became known as Windsor, Conn. Some of the people moved in 1635 and the others followed in 1636. In that year Thomas was chosen to establish the boundaries of Windsor. He was elected to the court in 1638 and served until 1648, during which tie he was elected 11 times. 23

Loomis does not mention this Benjamin's wife, but see TAG for an extensive explanation. Benjamin Loomis was born on 20 May 1679 at Windsor, Hartford Co., CT. He was the son of Thomas Loomis and Mary Judd. Benjamin Loomis married Ann Fitch, daughter of Capt. Joseph Fitch and Mary Stone, on 6 January 1703.

b. March 1663
Rebecca Fitch was born in March 1663. She was the daughter of Capt. Joseph Fitch and Mary Stone.1

Hannah Loomis was born on 8 February 1657/58 at Windsor, Hartford Co., CT. She was the daughter of Thomas Loomis and Hannah Fox. Hannah Loomis married Philip Judd, son of Thomas Judd, by 1681.

Philip Judd was born in 1649.2 He was the son of Thomas Judd. Philip Judd married Hannah Loomis, daughter of Thomas Loomis and Hannah Fox, by 1681. Philip Judd died in 1689 at Waterbury, New Haven Co., CT.2

Elizabeth Loomis was born on 21 January 1663 or 1664 at Windsor, Hartford Co., CT. She was the daughter of Thomas Loomis and Mary Judd. Elizabeth Loomis married John Lee, son of John Lee and Mary Hart, on 27 December 1682.2

Sarah Loomis was born on 1 February 1667 or 1668 at Windsor, Hartford Co., CT. She was the daughter of Thomas Loomis and Mary Judd. Sarah Loomis married Wakefield Dibble on 27 December 1692. Sarah Loomis died in 1693.

Wakefield Dibble was born on 15 September 1667. He married Sarah Loomis, daughter of Thomas Loomis and Mary Judd, on 27 December 1692.

Mabel Loomis was born on 27 October 1672 at Windsor, Hartford Co., CT. She was the daughter of Thomas Loomis and Mary Judd.

Mindwell Loomis was born on 6 August 1676 at Windsor, Hartford Co., CT. She was the daughter of Thomas Loomis and Mary Judd.

William Burnham was born between November 1645 and October 1646. He was the son of Thomas Burnham and Anna Wright. William Burnham married Elizabeth Loomis, daughter of Nathaniel Loomis and Elizabeth Moore, on 28 June 1681 at Windsor, Hartford Co., CT.1 William Burnham died after 5 July 1720 and before at probably Wethersfield, CT.