William Holcombe was the son of Micha Holcombe and Hannah Hayes.

McPherson notes that all of the children listed here are done so for convenience because they all appeared in the census records of the time at that place. The children not in the household are only listed because of their proximity to Virgil in the 1850 cenus of Milan. There are only three children listed that are assumed to be of Virgil and Sophronia.

Virgil and Sophronia were enumerated in the 1850 Milan, Monroe Co., MI, federal census. He was a farmer age 62, she was 57. Children in the household were Julius 30, Earl 18, and Albert 14, all born in NY. Justin and Seymour were enumerated nearby with their families.

If Ansel A. was a child of Virgil and Sophronia he would have been enumerated in 1850 still in the household since he didn't marry until 1855. See the notes under Ansel A. as it is apparent from examining census records that he is the son of Horace Holcombe and Candace Roberts. In fact, McPherson makes a note under Ansel's entry of another Ansel Burdette Holcombe, son of Robert Burgess Holcomb and Maria Harrington, on page 40.1 item A-4-2-10-5-14.

Elam Holcombe was the son of Joseph Holcombe and Sarah Ford.

Child of Lory Holcombe and Leora (?)

Alva Holcombe was the son of Joseph Holcombe and Sarah Ford.

Erastus Holcombe was the son of Joseph Holcombe and Sarah Ford.

Arden B. was enumerated in the 1830 Granby, Hartford Co., CT, federal census.

Ardon was enumerated in the 1850 Granby, Hartford Co., CT census, a lawyer age 46, boarding in the home of Ezekiel Alderman.

Ardon was enumerated in the 1870 Montana, Boone Co., IA, federal census. He was a retired lawyer, a widower, age 66. The only other person in the household was Sumner, 12.

from the Dictionary of Unitarian & Universalist Biography, by Alan Seaburg.


Caroline Augusta White Soule (1824-1903), a novelist, poet, religious writer, editor, and minister, was one of the founders and the first president of the earliest national organization of American church women, the Woman's Centenary Aid Association. She was the only missionary sent to Scotland by the Universalist Church, and in 1880 the first woman to be ordained as a minister in the United Kingdom.

Born in Albany, New York, Caroline was the third of six children of Nathaniel and Elizabeth (Merselis) White, of whom only three survived to become adults. Her mother, at first a member of the Dutch Reformed Church, was a descendent of one of the first settlers in Albany. Her father, a Universalist, was a mechanic from Hartford, Connecticut.

Caroline attended a variety of local schools including, when she turned twelve, the Albany Female Academy. Always a fine student, she received at her graduation ceremony from the Academy in 1841 a gold medal for her essay, "The Goodness of God Not Fully Demonstrated Without the Act of Revelation." A. B. Grosh, minister at the Albany Universalist Church where the White family worshipped, described her at this time as "so small, slender, timid and shrinking that she looked even younger" than her seventeen years.

After graduation Caroline was employed, without pay, as the principal of the female department of the Clinton Liberal Institute in Clinton, New York, a secondary school that had been founded in 1831 by the Universalist Church. In 1842 she taught two terms, about seven months, until poor health compelled her to return to her family home in Albany. While in Clinton she worked with principal Henry Birdsell Soule (1815-1852). "Mutual pursuits at Clinton necessarily drew us together—mutual trials begat sympathy, and who does not know that sympathy is the dawn of love," Caroline later wrote. "Ere the first term of our engagement closed, our hearts were one."

Caroline and Henry were married in Albany by their mutual friend A. B. Grosh. After living in Utica for a year they moved to Boston where Soule candidated, 1844-45, hoping to be chosen associate and successor to the aging Hosea Ballou at Second Universalist Society in Boston. Although his peers regarded him as a talented preacher, he was not chosen for this important position. Poor health limited his career. His remaining pastorates were brief: Gloucester, Massachusetts, 1845-46; Hartford, Connecticut, 1846-50; and Granby, Connecticut, 1851. While in Hartford Caroline helped her husband edit the Connecticut Odd Fellow and started writing short stories—always with a proper and obvious moral—for the Hartford Times and for Universalist magazines.

When Henry died of smallpox in early 1852 Caroline Soule found herself an impoverished widow with five children. To earn money she taught school for a while. Her chief income, however, was from writing and work as a religious editor. She prepared a biography of her husband for the Christian Ambassador, which was also issued as a tract. Soon afterward she expanded it into a book, Memoir of H. B. Soule, 1852. As her stories had been well received by the Universalist public, she continued to turn them out for such Universalist magazines as the Rose of Sharon and the Ladies' Repository. A collection of these tales, Home Life; or A Peep Across the Threshold, was issued by the Boston Universalist publisher Abel Tompkins in 1855. While living in Granby she also edited the Rose-Bud, an annual for young people.

In 1854, in order to live less expensively, Soule moved her family to a log cabin in Boonsboro, Iowa. During these years she wrote two novels, The Pet of the Settlement, 1860, based on her life on the prairies, and Wine or Water: a Tale of New England, 1862, a temperance story. She considered Tompkins, who published them both, the "guiding star of my literary life." In 1856 Henry Bacon, editor of the Ladies' Repository (published by Tompkins), made her corresponding editor. Bacon's successor, Carolyn Sawyer, appointed Soule assistant editor, 1861-65.

In 1863, her children grown up, Soule moved to Albany, New York to get medical treatment for her failing eyesight. In 1867 she moved to Fordham, New York to live in a house that she named "Content" and opened an office in New York City where she continued her writing and editorial duties. She managed, edited, and contributed to the Guiding Star, 1868-79, a semi-monthly for church school pupils. For seven months in 1873-74 she was the chief editor of the New York State Universalist newspaper, The Christian Leader.

In 1869 Soule helped organize the Women's Centenary Aid Association (WCAA), created to be a part of the Universalist centennial celebration and to raise money for a new endowment fund, named after John Murray, who had begun preaching Universalism in America in 1770. Elected its president, she traveled across the country urging Universalist women to join and to gather money for the John Murray Fund. By the 1870 Universalist General Convention the women's group had a membership of 13,000 and had raised $36,000.

In 1874 Soule preached her first sermon, at the age of 49. On holiday to restore her health in 1875 she visited Scotland. As president of the WCA, which was at that time responsible for raising money for missionary work in Scotland, she was interested in meeting the Universalists there. There she preached, helped with the formation of the Scottish Universalist Convention, and participated in the dedication of a Universalist church building at Larbert. Her first formal pastorate was to the Liberal Christian Association of Elizabeth, New Jersey, beginning in 1876.

In 1877 the WCA voted to send Soule as their missionary in Scotland. Arriving the following year, she preached in Dumfernline, Larbert, Braidwood, Lochee, Dundee, and Glasgow, and in England and Ulster as well. In her second year she settled among the Universalists of Glasgow, whom she helped reorganize as St. Paul's Universalist Church. In 1880 the Scottish Universalist Convention ordained her, making her the first woman to be ordained in the United Kingdom. It was to take the Church of Scotland until 1968 to approve the ordination of women. She served as secretary to the Convention, 1881-82.

During 1882-86 Soule was back in the United States, helping with the WCA and preaching in Hightstown, New Jersey, 1882-83, and on tour in New England and throughout the West. Marion Crosley, a minister from Utica, New York, meanwhile filled the pulpit in Glasgow. In 1886 Soule returned to Glasgow, where she served until her retirement in 1892. She also filled the Unitarian pulpit in Dundee, 1886-87, while her friend Henry Williamson visited the United States. Williamson, whose church was in one of the poorest parts of Dundee, wrote that "she was most devoted to making the common people share her great hope and faith."

The Scottish Universalist Convention made her its honorary president in 1888. After retirement she remained in her adopted homeland, among the people she had served and come to love. "I was always tired, for there was never a chance to rest," she wrote in 1894. "But fatigue in the cause of Universalism is infinitely better than inaction."

It is probably Martha Ellen ("Martha") in the household of her grandparents, David and Hilpah (Hayes) Goodrich when enumerated in the 1850 Granby, Hartford Co., CT census.

b. 20 September 1830, d. 16 February 1899
Alfred Goodrich Holcombe was born on 20 September 1830 at Granby, Hartford Co., CT.1 He was the son of Ardon Benjamin Holcombe and Catherine Goodrich. Alfred Goodrich Holcombe died on 16 February 1899 at age 68.2 He was buried at Granby Center Cemetery, Granby, Hartford Co., CT; No Stone.3 Artist in NYC.

Probably born in Boone Co., IA; enumerated there in the 1895 Iowa state census. 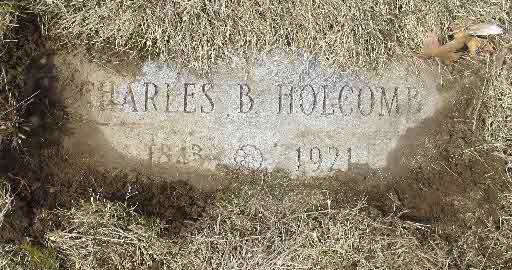 Organized the 1st Glee Club in Yale University in his 1st year as a student there in 1859; served as organist for 28 years for the First Church of Christ, Simsbury, Hartford Co., Ct, where he was in the hardware, coal and lumber business for 40 years; wrote many songs, published at Boston, and many articles on historical, scientific and philosophical subjects. When past 60 years old often took canoe trips with sons on the CT river from Windsor, Ct to Long Island Sound. His sons were talented in music.

The SSDI shows his death but no location. Issued Michigan.

Charles graduated from Mass. State College, Amherst, 1905; studied music in Boston, where he became a member of the faculty of Curry School; taught voice and engaged as baritone singer.

b. 9 September 1891
Unmarried and lived with her mother in East Cleveland, Ohio. Abby Humphrey Holcombe was born on 9 September 1891 at Tariffville, Hartford Co., CT. She was the daughter of Charles Brainard Holcombe and Sarah Munson. 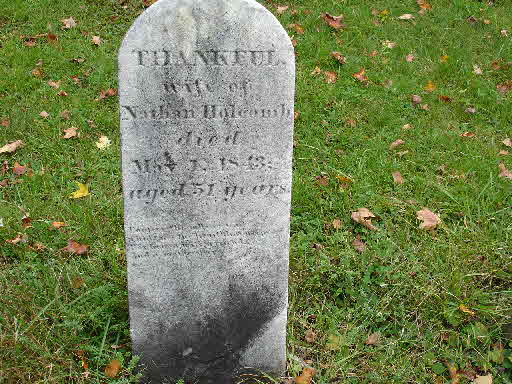 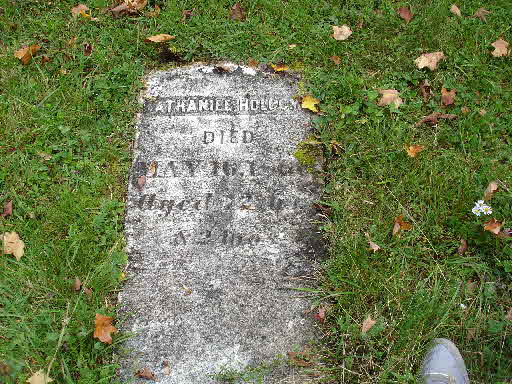 
Harriet and Pamelia were enumerated in the 1860 Colesville, Broome Co., NY, federal census, living alone. Harriet was 57, Pamelia was 38.

Ada is possibly the daughter of Joseph and Mary (Thrall) Strickland. 3

The Holcombe genealogy gives his birth as 1825, but the gravestone gives the 1824 date. Massachusetts Birth Records also confirms the birth date.

Family tradition says his death resulted from a broken back after being hit by a bull.

Harvey and Maria were enumerated in the 1860 Hartland, Hartford Co., CT federal census. He was a farm laborer 36, she was 24. The only child in the household was C.H. age 3. There were three other children, surnamed Marsden(?) ages 9, 8, and 6.

Henry and Phebe were enumerated in the 1860 Granby, Hartford Co., CT, census with Edward and Howard.


Charles A. and Maria were enumerated in the 1880 Belchertown, Hampshire Co., MA, federal census. He was a blacksmith age 49, she was 42. Children in the household were Henry C. 22, Nellie M. 19, James W. 17, Hattie G. 13, Olive M. 10, Minnie W. 8, and Freddie E. 6. This census indicates that Charles' wife was "Maria" born in Massachusetts as were both her parents. The two previous censuses indicated that she was Martha born in Vermont. Apparently between 1870 and 1880 Charles remarried. Could Minnie and Freddie be Maria's children? For that matter, Hattie G. makes a first appearance in this census, age 13, does she belong also to a previous marriage for Maria? By 1880 this appears to be a blended family and more research is necessary.

Children of Charles A. Holcombe and Martha A. Wilder

Children of Charles A. Holcombe

b. March 1798
William Roberts was born in March 1798 at Nottingham, England. He married Nancy Hoyt Bean.