b. 2 July 1907, d. 24 May 1932
He was a New York State Trooper, member of Co. G Horse Brigade. He was killed in an auto accident on his way home after having been on duty three days and three nights on a stake-out. Morton Russell Tripp was born on 2 July 1907 at East Granby, Hartford Co., CT. He was the son of Cyrus Bodfish Tripp and Margaret Josephine Holcombe. Morton Russell Tripp died on 24 May 1932 at Troy, Rensselaer Co., NY, at age 24.

Children of John Hoyt Bean II and Addie May Holcombe

b. circa 1797
Eli Phelps was born circa 1797 at Bloomfield, Hartford Co., CT. He was the son of Abner Phelps and Louisa Holcombe.

b. 1730, d. 18 April 1827
Martin served in Capt. Jonathan Pettibone's Co. of Militia, Campaign of 1755 in the French and Indian War. He also served in the Revolutionary War in the Continental Army. Martin Case was born in 1730. He was the son of Capt. Jonathan Case and Mary Beaman. Martin Case married Lucy Adams, daughter of Daniel Adams and Lucia Saxton, circa 1756. Martin Case died on 18 April 1827 at Simsbury, Hartford Co., CT. He was buried at Hopmeadow Cemetery, Simsbury, Hartford Co., CT.

Polly was enumerated in the 1850 Liberty, Delaware Co., OH, federal census in the house of John Thomas, she was 61.

In 1830 Hull Holcombe was chosen Highway Surveyor for the 9th District and throughout that decade he was Fence Viewer, Tythingman, Pound Keeper and one of five assessors. In 1839 he was selectman along with Sereno Holcomb and Elmore Clark. Hull was the second of three consecutive generations to operate a tavern at the corner of Barn Door Hills Road and County Road in Granby: Benajah Philo Holcombe was the first generation, his son Hull was the second generation followed by the latter's son, Edmund Buell Holcombe. Benajah Philo Holcombe held a tavern license 1796-1807 and 1811-1826. The house burned in the 1930's.

Widow Lorinda was enumerated in the 1850 Granby, Hartford Co., CT census. Laura age 27, and Isabella age 3, were also in the household. 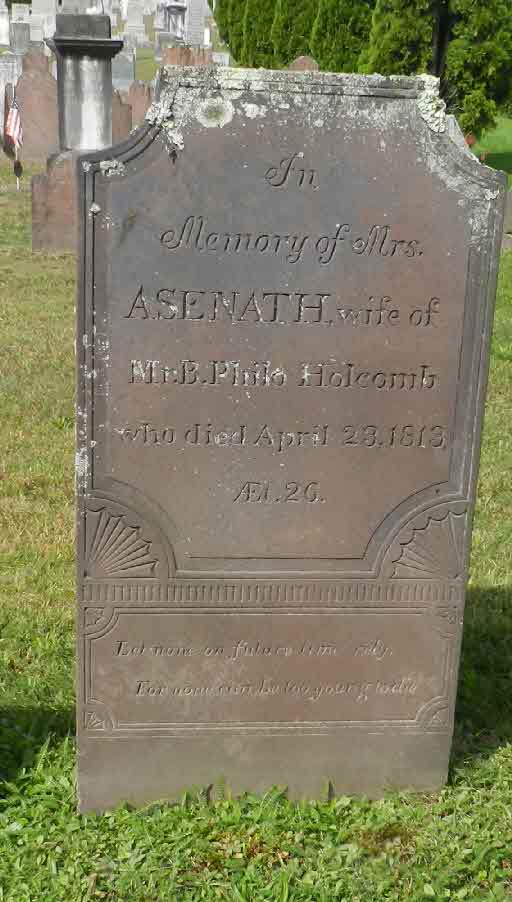 Probably the Sherman Holcombe who was enumerated in the 1860 Granby, Hartford Co., CT, census as a farm laborer working in the household of Washburn Edgerton.


Probably the Sherman Holcombe who was enumerated in the 1870 Granby, Hartford Co., CT, census as a farm laborer working again in the household of Washburn Edgerton. 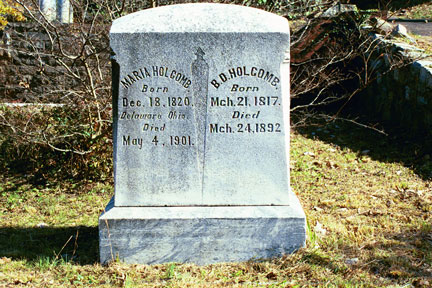 Benajah lived in adult life in Smethport, McKean Co., Pa., Cincinnati, O., Atlanta, Ga., Delaware, O., and S. Jacksonville, Fla; had to make his own living as a boy and became a printer; moved his family to Atlanta, Ga. soon after the War Between the States, spending a long span of his life there; made strategic purchases of land in locations becoming Atlanta's central business section and profited greatly from its growth into a city; late in life bought a small orange grove in S. Jacksonvile, Fla.


Benajah apparently died in South Jacksonville and his body was brought to Atlanta by train. A funeral notice in the March 27, 1892 Atlanta Journal-Constitution noted that a delay in the trains had caused a postponement of the funeral which would be conducted at the residence of his son-in-law, J. A. Curtis, at 328 Jackson Street.


Maria was his cousin. She apparently returned to Atlanta after the deaths of Asenath and Benajah in South Jacksonville and lived with her daughter Mary Curtis. She died there. A notice in the May 5, 1901 Atlanta Journal-Constitution detailed her passing.


The plot in the Historic Oakland Cemetery has a large central memorial stone with data on all five family members buried there: Benajah, Maria, Asenath, Henry, and Asa, and a foot stone for each. The lot is planted in Scarlet Flame creeping phlox.

Philo was reared in Ohio; served in the US militia when Indians made a raid on Fort at Julesburg, Sedegewick Co., Colo. the heroic defense saving it, at the risk of lives of himself and comrades. After the close of the War Between the States he worked in New Orleans, then followed his parents to Atlanta, GA.

He was a latin and Greek scholar, scientist and inventor, accumulating in his home in Atlanta an extensive library, particularly of the new electrical equipment. He was an early telegrapher, lived in Atlanta 50 years during 44 years of which he was superintendent of Western Union Telegraph Co's office there.

Philo and Rebecca were enumerated in the 1880 Atlanta, Fulton Co., GA, federal census. He was a telephone operator, age 36, she was 26. The only child in the household was Ruth 1.

In 1911, Philo filed for an invalid pension for his service in the 85th Ohio Volunteer Infantry. In 1926 Rebecca filed for a widows pension.

In 1926 Rebecca filed for a widow's pension.

Amy Elizabeth Holcombe was born at Smethport, McKean Co., PA. She was the daughter of Benajah Dwight Holcombe and Maria Augusta Payne.

Edbert Holcombe was born at Smethport, McKean Co., PA. He was the son of Benajah Dwight Holcombe and Maria Augusta Payne. 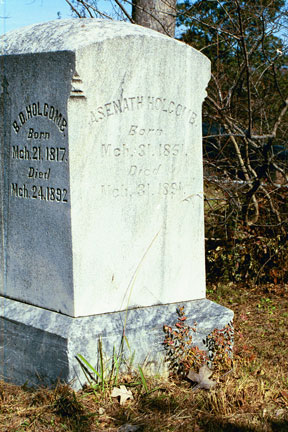 A funeral notice in the Atlanta Journal-Constitution from April 2, 1891, noted that she had been a "lifelong sufferer, but was never known to complain." 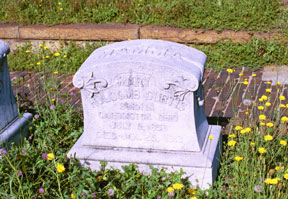 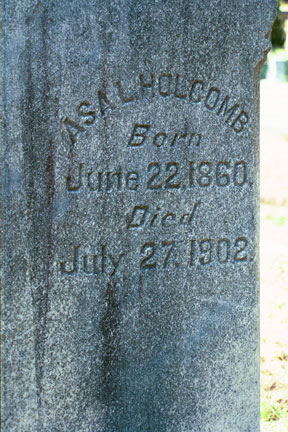 Austin and Dwight were enumerated in the 1920 Los Angeles, Los Angeles Co., CA, federal census. He was a newspaper editor, age 52, widowed, he was 18, a student.

Austin and Pauline M. were enumerated in the 1930 South Gate, Los Angeles Co., CA, federal census. He was a newspaper editor, age 52, she was a Christian Science Practitioner, age 58.

Charles and Ruth were enumerated in the 1920 Sheffield, Colbert Co., AL, federal census, ED 19, page 14B. He was a stove and range manufacturer, age 44; she was 40. Children in the household were Ruth Elloise, 11; Charlotte R., 9; and Charles Holcomb, age 7. Both of Charles' parents were born in England.

from The Atlanta Constitution 6 May 1911:


Mr. Holcomb was 30 years of age and had been for many years connected with the Postal Telegraph Company, in their electrical department; being of studious habits, he had made rapid progress and was known as a capable and efficient telegraph engineer, and undoubtedly, except for the breakdown of his health, a brilliant future in his chosen profession was before him.


He was an associate member of the American Institute of Electrical Engineers, the foremost electrical engineering society of America, and a member of Piedmont Lodge, No. 447 F. and A. M., and his funeral will be conducted by the Masonic Fraternity.

Miss Mary Elizabeth Holcomb has returned to Atlanta. Miss Holcomb has been in Athens the past two years studying at the Normal, from which institution she was graduated in June.

When Philo filled out his Application for a Social Security Account Number, he was working for the Western Union Tel. Co. at 60 Hudson St., New York City, and living at 136-05 Sanford Ave., Flushing, NY.

Hugh was enumerated in the 1930 Atlanta, Fulton Co., GA, federal census. He was divorced, age 33, living in the household of his mother, Rebecca.3

1850 Census records Clinton as a member of his step-father, Ezekiel Hayes', family in Litchfield, Co., CT. Clinton H. Holcombe was the son of William Holcombe and Julia A. Jones.

b. 16 December 1819
Elizur Ezekiel Hayes was born on 16 December 1819. He married Alicia Melvina Holcombe, daughter of William Holcombe and Julia A. Jones, on 6 December 1845 at Barkhamsted, Litchfield Co., CT.

Ellen was enumerated in the 1900 Westfield, Hampden Co., MA, federal census. She was widowed and living in a household with her two sons.