b. 7 December 1705
Sarah Phelps was born on 7 December 1705 at Windsor, Hartford Co., CT.1 She was the daughter of Cornelius Phelps and Sarah Mansfield.1

Dr. Philip E. Mosely, who was responsible for the planning of post-World War II settlements and who was one of the country’s leading experts in the Soviet Union, died Thursday at his home in New York City.

A founder and former director of the Russian Institute at Columbia University, Dr. Mosely spend most of his career as an academician, frequently doing historical, political and social research in Russia.

After receiving undergraduate and doctoral degrees from Harvard, Dr. Mosely did research in Moscow and in the Balkans and taught at Union College and Princeton and Cornell universities before starting his service with the State Department in 1942.

He served as an adviser to Secretary of State Cordell Hull at the Moscow Conference in 1943 and as a member of the U.S. delegation to the European Advisory Commission in London and the Potsdam Conference in the next two years.

As an adviser to Secretary of State James F. Byrnes, he took part in the Council of foreign Ministers meetings in London and in Paris in 1945 and 1946 and was also the U.S. representative on the commission for the investigation of the Yugoslav-Balkan boundary in 1946.

That same year he founded the Russian Institute at Columbia and was a professor of international relations there, serving as the institute director from 1951 to 1955. He left to become director of studies fo the Council on foreign Relations in New York. He returned to Columbia in 1963.

For nearly two years, starting in 1968, Dr. Mosely was chairman of the research council at the Georgetown University Center for Strategic and International Studies.

He was the author of several books including “Russian diplomacy and the Opening of the Eastern Question in 1838 and 1839,” and “The Kremlin and World Politics.” He was the editor of “The Soviet Union, 1922-1962” and “A Foreign Affairs Reader.”

He was a trustee of the Rand Corp., and of the Foreign Policy Association and a member of the foreign affairs committee of the Chamber of Commerce of the U.S. and of the Social Science Advisory Board of the U.S. arms Control and Disarmament Agency.

He is survived by his wife, Ruth; two daughters, Mrs. John Lesch, of Princeton, and Mrs. Philip T. Jackson, of Oberlin, Ohio; a brother, a sister and a grandchild.

b. 1919
Martha Fellows was born in 1919 at CT.1 She was the daughter of Albert Charles Fellows and Edith Holcombe.1

When William filled out an application for a social security card on 10 July 1941, he was 16 and working at the Canton Spring Co., in Canton. He listed his birth in Simsbury on February 19, 1925 and his parents "Harld" and Helen Maria Passaur Holcombe, with "Helen" struck through.

b. October 1877
Jennette E. Morgan was born in October 1877 at CT.1 She married Anson Martin Holcombe, son of Martin Philander Holcombe and Abigail Blood, circa 1894.1

b. circa 1903
Grace Holcombe was born circa 1903 at CT.1 She was the daughter of Anson Martin Holcombe and Jennette E. Morgan.1 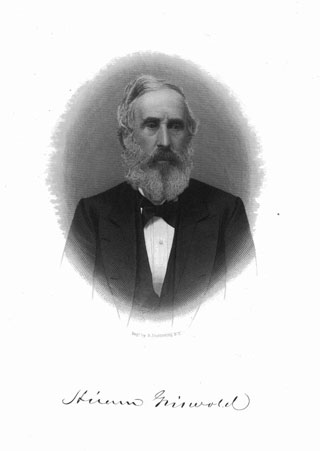 Hiram was a laywer who lived in Cleveland and Canton, Stark, Ohio then Leavenworth, Leavenworth, Kansas. He served in the Ohio Senate. 2 He was the defense attorney for John Brown the abolitionist, having been asked to volunteer for the task by Judge Daniel R. Tilden of Cleveland.

Hiram and Ellen were enumerated in the 1850 Canton, Stark Co., OH, federal census. He was a lawyer, age 42, she was 42. Children in the household were Margaritta 20, and Hellen Nicholson 14.

Hiram and Eleanor were enumerated in the 1860 Newburgh Heights, Cuyahoga Co., OH, federal census. He was a lawyer, age 53, she was 50. There were no children in the household.

Hiram and Elenor were enumerated in the 1870 Leavenworth, Leavenworth Co., KS, federal census. He was a lawyer, age 63, she was 60. There were no children in the household.

Hiram and Mary were enumerated in the 1880 Leavenworth, Leavenworth Co., KS, federal census. He was a lawyer, age 73, she was 44. There were no children in the household.

from Biograpohical Sketches of Liberty Township:

Gloria D. (Grove) Grove-Holcomb, 71, of 87 North Lake Ave. died Wednesday at home. She worked at Magnetec in Bloomfield, Conn., for several years. Born in Springfield, she lived here for 65 years. Her first husband, Edward Grove, died in 1960. She leaves a son, Edward A. Grove of Southwick; two daughters, Janis Gustafson of Hampton, Va., and Sheila LaPointe of Southwick; two stepdaughters, Kathy Snow of Westfield, and Rosemary Schmit of Woronoco, Russell; five grandchildren; five great-grandchildren, and her former husband, Harold ("Red") Holcomb of Westfield. The funeral will be Saturday morning at Firtion-Adams Funeral Home of Westfield, with the burial in New Cemetery. A calling hour will precede the funeral, and memorial contributions may be made to the Westhills Hospice, 77 Mill St., Westfield, 01085.