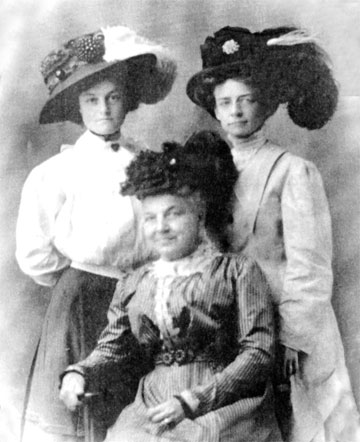 It is reported that Joseph was married and that he was an accomplished pianist and he performed on stage. Joseph Eness was born at Grand Rapids, Kent Co., MI. He was the son of Joseph D. Eness and Harriette H. Karr.

Kathryne graduated from Western Michigan University, Kalamazoo, and was an elementary public school teacher for 30 years until her retirement. They resided in Maryland, Oklahoma, and Michigan. During WWII, she taught in a one room red brick school house in the country near Wayland for 10 years, teaching grades K-8. She retired in Jenison, MI.


Raymond and Kathy were enumerated in the 1930 Oklahoma City, Oklahoma Co., OK, federal census. He was a factory repair man at a motor co. age 30, she was 26. Two children in the household were Thomas 2 years 3 months, and William 1 year 5 months.

b. 8 May 1905, d. 1988
Grace Elvira Armstrong was born on 8 May 1905 at Grand Rapids, Kent Co., MI. She was the daughter of Willard Warren Armstrong and Sarah Alvira Wynkoop. Grace Elvira Armstrong died in 1988 at Cherry Valley, Riverside Co., CA. Nikki was married for a short time, however nothing is known of his whereabouts or if they were divorced. She lived most of her life in an apartment on Riverside Drive in New York City, NY, with Lee Thompson, who was a teacher of piano at Juliard School of Music in NYC. Nikki was the head librarian for over 30 years at Columbia Univeristy in NYC,until her retirement. they moved to Southern California (Palm Springs) after retirement.

b. 27 March 1809
Betsey Holcombe was born on 27 March 1809 at Plymouth, Chenango Co., NY. She was the daughter of Orange Holcombe and Lydia Rogers.

John moved to Wirt, Allegany Co., NY, about 1837 with the 5 childen of this first wife. He was elected constable in 1839 and at the same time he was working at his trade as a Blacksmith. 2

When the railroad came through his land John built a new house on his farm of red brick which were hand made on his farm. John served as the Town Justice in 1854. He was appointed the Station Agent of the Milwaukee & Mississippi Railroad from 1852 - 1862. 2

b. 8 June 1775
Asenath Rogers was born on 8 June 1775 at New London, CT.1 She was the daughter of Elder Davis Rogers and Hannah Miner. Asenath Rogers married Joseph Truman, son of William Truman, on 4 February 1798.

b. 7 August 1776
Joseph Truman was born on 7 August 1776 at Southold, Long Island. He was the son of William Truman. Joseph Truman married Asenath Rogers, daughter of Elder Davis Rogers and Hannah Miner, on 4 February 1798.

Fred was an employee of the City of Hartford Park Department more than 20 years.