They removed from CT., to Erie Co., NY, and then to Canandaigua, Ontario Co., NY; they then moved again to Attica, Wyoming Co., NY, where he bought a tract of land included in the immense acreage sold by Robert Morris to the Amsterdam Co., known as the "Holland Purchase"; came West, to Sycamore, Ill., with his family about 1839. Orator died in 1843 and is interred in Elmwood Cemetery as his second burial place. Hannah Terry Holcombe returned to New York State.

Sylvanus died intestate and administratation was granted to his brother Seth on 3 Dec 1800.2

Heirs of Abigail were mentioned in her father's will but not by name. her husband was probably the son of Lt. thomas Barber (Thomas) and, if so, was born at Windsor, 17 October 1671, died Simsbury, 17 July 1714 (Manwaring 2:155), but though the probate shows Abigail as widow, no children are named, and the only child seen is Thomas.

McCracken notes that she survived her father but he knows nothing of her subsequent history. Howeve Olivia Patch and Richard C. Roberts in the Descendants of the Founders of Ancient Windsor Newsletter of the Summer 2019 documented William Goring and Elias Slalter.

b. circa 1684
Hannah Buell was born circa 1684.2 She was the daughter of Sgt. Peter Buell and Martha Cogan. Hannah Buell married Richard Saxton, son of Mary Hill, on 20 June 1706 at Simsbury, Hartford Co., CT.

Thomas Wells was the son of Hugh Wells.


I, Sarah Pinney of Windsor, widow, being aged and weak, doe make this my last will and testament: I give to my four daughters, Sarah Moore, Mary Addams, Abigail Winchell and Sarah Grant, the wife of Thomas Grant, the whole of my estate, to be equally divided between them. I make my brother Ensign Joseph Griswold and Sergt. Benajah Holcomb executors. 4

Children of Francis Griswold and Sarah (?)

John was a farmer, a prominent and leading citizen. He was a deacon for many years. He served on important civil committees and as deputy in 1690. he was named a captain in 1712 and served in the Indian Wars for which the town granted him six acres. His will named his wife, five sons, and seven daughters.

George Griswold was born at England. He married Honora Pawley circa 1616.

Matthew came to Windsor in 1639 with Edward Griswold, his older half brother, and the cngregation of the Rev. Ephraim Huit, but did not remain there long. He became an agent of Lord Fenwick and moved to Saybrook where he received a grant of land in 1645 which became the foundation of a large fortune.

Old Lyme was first settled in 1664 as East Saybrook, and Matthew as the pioneer and its first settler. He was one of the signers of the Articles of Separation in 1665.

Although Matthew was a lawyer, he also followed the trade of a mason, furnishing the stones for many of the graves of the early settlers. He also furnished the stone for his father-in-law, Henry Wolcott, which is almost intact after all these years. However, there is no stone for Matthew's grave, nor do we know exaclty where he is buried, although there are are records which would lead one to believe that he is probably buried in the Old Saybrook Cemetery. Although he removed to Lyme, he remained a member of the Saybrook church and was brought there for interment.

The terrible consequences of the witchcraft delusion and the opportunity which it provided for the poor and unscrupulous membes of the community to harass people of wealth and character cannot be better illustrated than by the following account, although the outcome was more fortunate than for some.

In 1667 John Tillerson charged the wife of Mathew Griswold of Lyme with being a witch and induced others to suspect her of witchcraft, for which Matthew caused him to be arrested and arraigned before the court. This John stated the cause of his suspicions and jealousies. The court decided that she was not a witch and that he had no cause to be jealous of her; that he had greatly sinned in harboring such jealousy against so good a neighbor who had done him so many favors. To clear Mrs. Griswold of all suspicion of the offense the Court ordered that its opinion should be published by the constables at Saybrook and Lyme at some public meeting.

Anna was living in September 1700 when she and Abraham Bronson were summoned before the court at New London as adminstrators fo the estate of Matthew. Abraham was summoned alone to the court in May 1701, so Anna evidently died in the interim.

The birth sequence of the children is from Vol. II:122 of the Middletown Congregational Church records, but the Frenches suspect a discrepancy.

Thomas Griswold was the son of George Griswold and Honora Pawley. 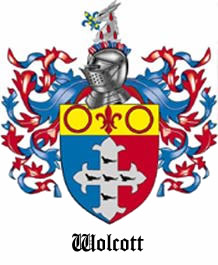 Henry was the emigrant to Windsor, Conn. As the second son of John Wolcott, of Galdon Manor, Tolland, Co. Somerset, Eng., he held a fair position among the landed gentry, and an estate which placed him in affluent circumstances. By the decease of his elder brother Christopher, intestate, 1639, the family estate, including the manor-house, mill. etc., also came into his possession after his removal to America.


The earlier portion of his life was passed in the quiet pursuit of a country squire's duties and responsibilities; but, becoming converted under the teaching of the Rev. John Elton, he soon found himself closely identified with the Puritan party in the religious and political revolution which then convulsed England. American presented to him, as to hundreds of others like-minded, the only asylum where civil and religious freedom could be found; and, though then past 52 years of age, and with children of an age when they most needed the social and educational advantages afforded in their native land, --to emigrate to a new home beyond the ocean. Taking their three sons, and leaving behind them for a time two daughters ands their youngest son (age 5), they joined the Warham and Maverick emigration of 1630, on the 19th of October in which yr. we find Henry Wolcott's name as one of the first list of freemen of Boston.


He rem. from Dorchester to Windsor in 1635; in 1637 was elected a member of the lower house of the first General Assembly of Conn; in 1640 stands first in a list of the inhabitants of Windsor; in 1643 was elected to the House of Magistrates (the present Senate) of Conn., and was annually re-elected during life, and was probably, after the pastor, the most distinguished citizen of Windsor; the younger child who had been left behind, rejoined the family between 1631 and 1641. His estate was inventoried at £764, 8s, 10d, not a large sum for one who is known to have sold about £8,000 worth of estate in England preparatory to removing to America. In the Ancient "Family Chronologie" it is recorded of Henry Wolcott and his wife, that "these both dyed in hope and Ly buried under one Tomb in Windsor."

Anna Griswold was the daughter of Matthew Griswold and Anna Wolcott.

Child of Nicholas Palmer and Joan (?)