Obediah was a farmer, Revolutionary soldier, and school commissioner, in North Granby.

"Aloud I call to all around, While here inclos'd I lie, Let faith and love in you abound, For you must shortly die."

Jabez was enumerated in the 1830 Prattsburgh, Steuben Co., NY, federal census. Beside a woman his age, there was also a young woman, 20-30, probably Rosina as Enoch Barker lived next door (family of Harriet). Also living nearby were Jabez Jr., and Seymour. Also living nearby was William McConnell (family of Alexander who married Rosina).

Seaver and Weir show Leonard, Simsbury records do not. Leonard Holcombe was the son of Joshua Holcombe IV and Martha Griffin. 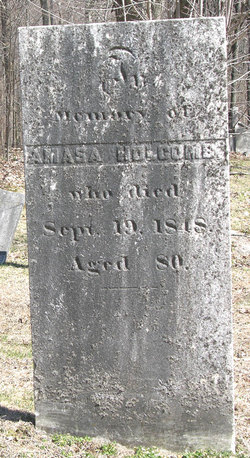 from Jan on findagrave.com
Amasa Holcombe was born in 1768. He was the son of Joshua Holcombe IV and Martha Griffin. Amasa Holcombe married Ruth Hoskins, daughter of Ezra Hoskins and Ruth Granger. Amasa Holcombe died on 19 September 1848.3 He was buried at Baptist Cemetery, Granby, Hartford Co., CT.3

Seaver has this record, Simsbury records do not.

Some records held by the Cossitt family, show his wife to be Temperance Cossitt, the daughter of Alexander Cossitt and Mindwell Wilcoxon. This cannot be correct, since we have a reasonably complete record of Temperance's life including her birth n 23 mar 1771, and her marriage to Butler Holcomb in 1793. Further study shows that the first daughter of Alexander and Mincwell Cossitt was Lydia Cossitt, born 21 Oct 1761. The Cossitt genealogy shows nothing more on her life. He birth date would make her just two years younger than John Goddard which seems much more reasonable than for Temperance, who would have been twelve years younger than John, and would have been only 12 at the time of her marriage to John, and only 14 at the time of birth of the first child. Further, John's first child, a girl, was named Lyddia. With this information, it seems very probable that his wife was actually Lydia Cossitt. 3


Granby records have been found showing the birth of two children to John and his first wife, however, Mrs. Jesse Green of Ohio, has furnished the dates and names for two additional children. She has since died and her records have not been located. It is suspected that she had some records not available elsewhere, such as a family bible or official papers which gave this information. The date of birth of John's fourth child also agrees with the probable time of the death of his first wife. 3


There does not seem to be any official documentation such as Vital Records or church records that shows that the above two sets of children do in fact belong to the same John Goddard. John lived out his later life with his son, Grove, and in his will (Granby #594), only Grove is mentioned. When it is realized that most of the family except Grove had moved to Ohio before 1831, it is likely that he would have lost contact with them. A study of many deed records, the census records from 1790 to 1850, and a record of a court judgment against Ranny Goddard provides the necessary proof for the fact that the two sets of children do indeed belong to this John Goddard. 4


John Goddard served in the Revolutionary War. The meager War record only shows that he was a private in the Company of Capt. Judd and in the Regiment of Col. Wills. There are however, extensive files on his applicatins for pension. He was granted a pension based on teh above service as a private. Much of his file consists of his efforts to have the pension increased, as he had served as a corporal for about 9 months of his almost two years total service. The many affidavits of friends and relatives provide much general background. These records also profice the only known proof of his birth date, and also include the date of his death. 4 Winfred Goddard's book has an illustration of his request for a pension increase. 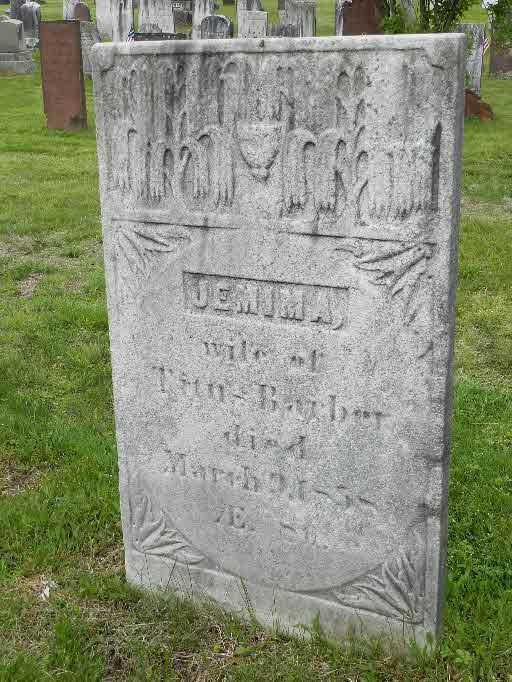 b. 1769
Rachel Holcombe was born in 1769. She was the daughter of Benajah Holcombe II and Lydia Forward.

Polly Holcombe was the daughter of Benajah Holcombe II and Lydia Forward.

Sabrina Holcombe was the daughter of Benajah Holcombe II and Lydia Forward.

b. 1773
Seaver and McPherson call this son Benjah Philo while Bowman lists seperate children, Benjah and Philo. Philo Holcombe was born in 1773. He was the son of Benajah Holcombe II and Lydia Forward.

b. 1762
Sarah Thede Holcombe was born in 1762. She was the daughter of Elijah Holcombe and Sarah Evans.

b. 1766
Different sources report his death being in Michigan or Utah. Eli Holcombe was born in 1766. He was the son of Elijah Holcombe and Sarah Evans.

b. 1768
Lois Holcombe was born in 1768. She was the daughter of Elijah Holcombe and Sarah Evans.

b. 1773
Zerviah Holcombe was born in 1773. She was the daughter of Elijah Holcombe and Sarah Evans.

Justus served on a sailing ship on several trips to the South Pacific, Japan, and Hawaii; moved to Meadville, PA, about 1820; went to California in the Gold Rush of 1849 and settled in Napa County, CA. They had children 1,2, 7, 9 in Viets, the others in Weir.3,4

The Phelps Genealogy, page 98, does not show William as a child of Sarah and Andrew.

The first mention, yet discovered, of Andrew Moore, of Poquonnock, Conn., is the record of his marriage, which is as follows: "Andrew Moore & fara Phelpes yt was Dafter of famuell Phelpes ware married by capten Newberry, February 15 1671"

In 1673, 34 members of the church of Windsor, called the new church, signed a paper which Gov. Winthrop endorsed, "Windsor men of the new church, complaint in Winter, 1673." (See Stiles' Ancient Windsor, Vol. I, p. 206.) In 1675 Matthew Grant paid Andrew Moore £1, 17s, on "war account." This must have been for services during the destruction of Simsbury by the Indians. Jan. 23, 1674, the town, by Matthew Grant, paid Andrew Moore, Nathaniel Pinney and Joseph Griswold for making a new ferry boat. They were paid £3, 6s., 8d., in barter, and it seems, too, that the tax levy was assigned before collection in the payment of debts, "In the good Old colony times."

Major John Talcott, who had agreed to extinguish the Indian title to Simsbury for 300 acres of land, gives a gloomy account of this, at that time, western country. He says that he "can find on place where any thing considerable can be taken up, the most of that which some call meadow is full of small brush and vines through which is no passing or full of trees great and small, and in ye place where the best land of that sort is, there is no accommodation of upland to it saving only mighty tall mountaynes and Rockes and the way bad to it, and a great way to all of it, and will be dismally obscure and solitary to any that shall live upon it, and very hard coming at the market, not only because of the remoteness but badness of the passage, and the society of the neighborhood will be very thin, all which will be discouraging."

At a later date Andrew bought land of John Gozard on the "east side of the mountains bounded easterly by Simsbury easterly bounds, southerly by John Pettybone, his lot, (allias Jonathan Moore, his lot) the bredth of s'd lot westerly by the commons is fifty rods." March 29, 1715, Andrew Moore of Windsor, deeded to his son Benjamin Moore "for divers good causes and considerations me thereunto moving, but especially in consideration of my fatherly love and affection I have to my son Benjamin Moore," fifty acres of land in Turkey Hills, now East Granby. In the description of this land Andrew mentions his son William.

Andrew Moore lived in Windsor, where the birth of all his children is recorded except that of William, and died Nov 29, 1719. The inventory of his estate was made on the 17th of December following, amounting to £320, and his widow, Sarah, was appointed administratrix. He had 15 acres of land in Windsor with house and barn, carpenter's tools, with farming implements, a cider mill, loom, spinning wheel, sword and belt and a library "prised at 8 shillings," besides two pieces of land in Simsbury. The distribution of the estate took place April 5, 1720, and each of his nine children took his share of the property after the widow's portion had been set off to her. 3