Gad Hunt was the son of Lieut. Simeon Hunt and Hannah Lyman.

Elizabeth Hale was the daughter of Deacon Richard Hale and Elizabeth Strong. 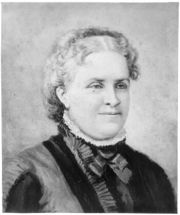 From Wikipedia, the free encyclopedia:

Helen Maria Hunt Jackson was an American writer best known as the author of Ramona, a novel about the ill treatment of Native Americans in southern California.

She was born Helen Maria Fiske in Amherst, Massachusetts, a daughter of Nathan Welby Fiske and Deborah Waterman Vinal. She had two brothers, both of whom died after birth, and a sister named Anne. Her father was a minister, author, and professor of Latin, Greek, and philosophy at Amherst College.
Her mother died in 1844, and her father died three years later in 1847, leaving her to the care of an aunt. Before her father's death, however, he saw to it that she had a good education. She attended Ipswich Female Seminary and the Abbott Institute, a boarding school run by Reverend J.S.C. Abbott in New York City. She was a classmate of the poet Emily Dickinson, also from Amherst. The two carried on a correspondence for all of their lives, but few of their letters have survived.
In 1852, Helen Fiske married United States Army Captain Edward Bissell Hunt, who died in a military accident in 1863. Her son Murray Hunt died in 1854 of a brain disease; her other son, Rennie Hunt, died of diphtheria in 1865. She began writing after these deaths.
She travelled a great deal. In the winter of 1873-1874 she was in Colorado Springs, Colorado, in search of a cure for tuberculosis. There she met William Sharpless Jackson, a wealthy banker and railroad executive. They married in 1875. She died of cancer in 1885.
Scholars know her as Helen Hunt Jackson, but she never used that name herself—she only used one married name at a time: Helen Hunt or Helen Jackson.

In 1879, her interests turned to the plight of the Native Americans after attending a lecture in Boston by Ponca Chief Standing Bear, who described the forcible removal of the Ponca Indians from their Nebraska reservation. Jackson was angered by what she heard regarding the unfair treatment at the hands of government agents and became an activist. She started investigating and publicizing the wrongdoing, circulating petitions, raising money, and writing letters to The New York Times on behalf of the Poncas. She also started writing a book condemning the Indian policy of the government and the history of broken treaties. Because she was in poor health at the time, she wrote with desperate haste. A Century of Dishonor, calling for change from the contemptible, selfish policy to treatment characterized by humanity and justice, was published in 1881. Jackson then sent a copy to every member of Congress with an admonishment printed in red on the cover, "Look upon your hands: they are stained with the blood of your relations." But, to her disappointment, the book had little impact.
She then went to southern California to take a much needed rest. She had become interested in the area's missions and the Mission Indians on an earlier visit, and now she began an in-depth study. While in Los Angeles, California, she met Don Antonio Coronel, a former mayor and city councilman who had also served as State Treasurer. He was a well-known authority on early Californio life in the area and was also a former inspector of missions for the Mexican government. Don Antonio described to Jackson the plight of the Mission Indians after 1833, when secularization policies led to the sale of mission lands and the dispersal of their residents.
Many of the original Mexican land grants had clauses protecting the Indians on the lands they occupied. But when Americans assumed control of the southwest after the Mexican-American War, they ignored Indian claims to these lands, which led to mass dispossessions. In 1852, there were an estimated fifteen thousand Mission Indians in Southern California. But, because of the adverse impact of dispossessions by Americans, by the time of Jackson's visit they numbered less than four thousand.
The stories told by Don Antonio spurred Jackson into action. Her efforts soon came to the attention of the U.S. Commissioner of Indian Affairs, Hiram Price, who recommended she be appointed an Interior Department agent. Jackson's assignment was to visit the Mission Indians and ascertain the location and condition of various bands, and determine what lands, if any, should be purchased for their use. With the help of Indian agent Abbot Kinney, Jackson criss-crossed Southern California and documented the appalling conditions she saw. At one point, she hired a law firm to protect the rights of a family of Saboba Indians facing dispossession of their land at the foot of the San Jacinto Mountains.
During this time, Jackson read an account in a Los Angeles newspaper about a Cahuilla Indian who had been shot and killed. His wife, it turned out, was named Ramona. On one excursion, Jackson was escorted by wagon to Santa Barbara and stopped off at Rancho Camulos in the Santa Clara River Valley, where she visited the adobe of the del Valle family. But the Señora del Valle was not home the day Jackson was there. And at the Mission Santa Barbara, Jackson made the acquaintance of Father Sanchez, a source of great inspiration.
In 1883, she completed her fifty-six page report, which called for a massive government relief effort ranging from the purchase of new lands for reservations to the establishment of more Indian schools. A bill embodying her recommendations passed the U.S. Senate but died in the House of Representatives.
Jackson, however, was not discouraged by this Congressional rejection. She decided to write a novel that would depict the Indian experience "in a way to move people's hearts." An inspiration for the undertaking, Jackson admitted, was Uncle Tom's Cabin written years earlier by her friend, Harriet Beecher Stowe.
"If I can do one-hundredth part for the Indian that Mrs. Stowe did for the Negro, I will be thankful," she told a friend. Jackson was particularly drawn to the fate of her Indian friends in the Temecula area of Riverside County and decided to use the story of what happened to them in her novel. She began writing the book in a New York City hotel room in December 1883, with an original title of In The Name of the Law, and completed the manuscript in slightly over three months. The result was her classic novel Ramona about a part-Indian orphan raised in Spanish Californio society and her Indian husband, Alessandro, which was published in November 1884 and achieved almost instant success.
Encouraged by the popularity of her book, Jackson planned to write a children's story on the Indian issue. But less than a year after the publication of Ramona, while she was examining the condition of the California Indians as a special government commissioner, she died of cancer in San Francisco, California.
Her last letter was written to President Grover Cleveland, urging him to read her early work A Century of Dishonor. Speaking to a friend, Jackson said, "My Century of Dishonor and Ramona are the only things I have done of which I am glad. They will live and bear fruit."
Each year, the city of Hemet stages The Ramona Pageant, an outdoor play based on Jackson's novel Ramona.

Hannah Hall was the daughter of Street Hall and Hannah Fowler.

Street Hall Morse was the son of Joel Morse and Hannah Hall.

Julia Anne Morse was the daughter of Street Hall Morse and Martha Bartholomew.

Henry Lines was the son of David Harpin Lines and Julia Anne Morse.

Ida Wilmot Lines was the daughter of Henry Lines and Mary Anne Wilmot.

b. 3 October 1887, d. October 1970
Jacobus was practically a born genealogist. His first two genealogical articles were accepted for publication when he was 16. In 1914 he published his first genealogical book which showed the careful attention to analyses of difficult problems that would characterize all his later work. In 1917 he decided to become a full-time profesisonal genealogist but two months later was was declared and he served overseas. In 1922 he published a journal, the New Haven Genealogical Magazine, which is now The American Genealogist. Donald Lines Jacobus was born on 3 October 1887 at New Haven, New Haven Co., CT. He was the son of John Ira Jacobus and Ida Wilmot Lines. Donald Lines Jacobus died in October 1970.

Thomas Strong was the son of Selah Strong and Abigail Terry.

Hannah Strong was the daughter of Thomas Strong and Susanna Thompson.

Selah Strong Smith was the son of James Smith and Hannah Strong.

Adelia Smith was the daughter of Selah Strong Smith and Anne Carpenter.