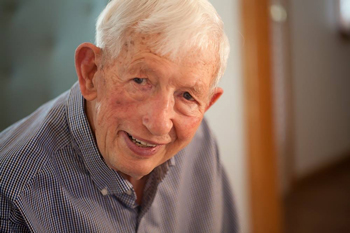 The elevator in the Bank of America building was sardine-can full as it shuttled passengers to the fifth floor for a reception honoring one of Emporia's most beloved and respected citizens on May 21.

There, in the offices of the Emporia Community Foundation, friends spent more than two hours reminiscing with Elvin Perkins and thanking him for decades of service to the community.
Perkins, 92, is moving to Kansas City to be near family members.

He first had come here to attend the College of Emporia, where he met fellow student Kathryn Prosser. They married in 1944, during his leave from the U.S. Navy, and returned to Emporia to stay in 1948, after he graduated from Washburn Law School in Topeka. In a short time, the couple was busy juggling jobs, family responsibilities and volunteer work as they integrated themselves into life in Emporia.

Elvin Perkin's legacy includes — but assuredly is not limited to — six years of service as a city commissioner and one year as mayor of Emporia; member, director and chairman of the Emporia Area Chamber of Commerce; board member of Emporia Enterprises, the National Teachers Hall of Fame, the Regional Development Association and the United Way of the Flint Hills.

Kathryn Perkins, who died Feb. 5, 2012, was equally committed in complementary activities and causes to better the quality of life and education here. She had received a degree in music education, with a major in pipe organ, from C. of E., and had taught for a few years in northeast Kansas schools before the couple moved to Emporia. She directed youth choirs and served as an elder and the organist for many years at First Presbyterian church, gave private music lessons, and played for many weddings and funerals. When the couple's children were young, she was involved in PTA, Cub Scouts, and Girl Scouts, serving as leader and as a council member. She later was president of the board of directors for the United Way of the Flint Hills and was involved in the Social Service Club and women's organizations. Voters elected Kathryn to the Emporia Board of Education, which she also served as president.She had been a member of the advisory committee for the music department at Emporia State University, and her interest in the arts extended beyond music. "They had been real active in the Emporia Arts Council," son Steve Perkins said. "She was kind of the spearhead of that thing, and he was right there with her."

He recalled his parents working together in the EAC's early days at its former location in an aging building on Merchant Street, when volunteers did the hands-on chores to develop it into a strong organization. "Dad would replace ceiling tiles," Steve Perkins recalled during the reception, "and they would fold programs together. ...They just kind of played off each other well." He said their top priority always had been family, but they believed they owed a responsibility to the place they had chosen to be the home town for their children, John, Janet and Steve. "That's what their whole belief was, to give back to the community," Steve said. "They just had a philosophy to do for the community."

Perhaps Elvin's most enduring contribution will be his role as one of the founders of the Emporia Community Foundation. Perkins and five other Emporians — Carl Didde, Barbara White Walker, Bobbie Agler, George Osborn, and the late Steve Davis — banded together in 1996 to develop a means for individuals and groups to pool their investment funds, utilize the strength in numbers, and increase their assets to be used for the betterment of the people in this area. ECF guidelines allowed for both small personal funds and larger organizational funds to come under the same umbrella of investment management. Perkins did the legal work and oversaw its operations until the Foundation's success demanded a director whose time was dedicated to the organization. ECF assets have grown to more than $14.7 million, according to its 2013 Annual Report, with 38 Field of Interest funds, 24 Designated, 18 Donor Advised, two Affiliated funds and four Unrestricted (including the Kathryn and Elvin Perkins endowment fund). The funds come from Emporia and Lyon County, as well as Chase, Morris, Greenwood, Osage, Coffey and Wabaunsee counties. Perkins' commitment to ECF continues; in 2013, he said he would match $1 for every $4 contributed by someone else through June 2014, up to a maximum of $23,000. "If you didn't put back in, you only take, it just depletes," Steve said. "I know that's a big deal for him, making sure this keeps going." ECF Board President Ken Buchele touched on Perkins' philosophy on giving during an earlier interview. "I think that's one of the things that's missing in our society," Buchele said then. "People don't figure out they didn't do everything all by themselves. "There were a lot of people around who helped them. ... Perk understands that. He's appreciative of it. It takes a guy like Perk to make it all work."

The elder Perkins' influence has been passed on to friends and family, perhaps more noticeably to their son John's daughter, Jennifer Perkins of Kansas City. Whether it was coincidence or something else, Jennifer has been tightly linked to her grandparents and is carrying on their tradition. She had worked in her grandfather's law office while in high school to learn more about a possible career as an attorney. Kathryn, as a board of education member, had handed Jennifer her diploma during the 1990 Emporia High School graduation ceremony. After graduating with honors from Emporia State University, she went on to graduate from Washburn University School of Law, on the golden anniversary of Elvin's graduation. It was a treasured moment for the grandfather, Steve said. Jennifer maintains a law practice and also devotes considerable time to an innovative 10-step project for students in the Kansas City area. She is listed as a member of the research team for Mulberry South, at www.goodcelebrated.com. "Jennifer is working on a program to teach young kids philanthropy," Steve said. "... The apple doesn't fall far from the tree."

Elvin was born on the family ranch, Elk County- Union Township, west of Howard, Kansas on May 26, 1922, the son of Ralph and Zora Root Perkins. He was the second of four children. Elvin attended primary school in the one room Union School and graduated from Howard High School in 1939. He entered the College of Emporia (Kansas) in the fall of 1939. It was while he was at the College of Emporia that he met his wife, Kathryn L (Prosser) Perkins. Elvin wanted to finish college before entering the war; he enlisted in a program that permitted him to complete his senior year, then enter US Navy midshipman school (on the Notre Dame campus) and get a commission. After receiving his commission he was sent to anti-submarine training then to Destroyer USS Trippe DD403, on which he spent his military career. The destroyer served in the Mediterranean, Atlantic and later the South Pacific where they were escorting other ships to Iwo Jima and Okinawa. Elvin and Kathryn were married in Osage City, Kansas on August 9, 1944 while Elvin was home on leave.

Following his discharge, Elvin entered Washburn Law School, in Topeka, and graduated in 1948. While in law school he clerked for several legislative committees. In the summer of 1948 they moved to Emporia to open a law practice.

Elvin’s law practice served a large variety of clients, and there he distinguished himself with his peers. He was invited to join The American College of Trust and Estate Counsel and The American College of Mortgage Attorneys. Invitation to one alone as a small town attorney was rare, but two was a major testament to his skills and accomplishments. Elvin was involved with Kansas Bar (KBA) activities. He was appointed by the Kansas Supreme Court to serve on the commission that mandated Continuing Legal Education (CLE) for attorneys and then served on the KBA CLE Committee.

Elvin and Kathryn held a strong belief that they serve the community in which they lived and they both did that well. From 1951 until 1973 Elvin served on the College of Emporia Board of Trustees and as Chairman for many years; his involvement with C of E continued even after the school closed as he spearheaded the successful effort to get all the college’s debts repaid. Elvin’s legacy of service included: six years of as an Emporia city commissioner and one year as mayor; member, director and chairman of the Emporia Chamber of Commerce; board member of Emporia Enterprises, the National Teachers Hall of Fame, the Regional Development Association and the United Way of the Flint Hills. Elvin and Kathryn were active leaders/ supporters at the Emporia Arts Council, First (Emporia) Presbyterian Church and Emporia State University music programs.

Elvin’s most enduring community contribution was his role in founding, leading and growing the Emporia Community Foundation. He served on both their Board of Trustees and Board of Directors where he was Chairman of each. For his service to the community he was recognized with the Lifetime Achievement Award by the Emporia Chamber of Commerce and in 2014 received a special commendation award from the Emporia City Commission for his contributions to the city.

Perk is remembered for displaying his positive outlook and being kind, gracious and generous to others. And truly, family is what Elvin cherished most. His caring, selfless love for his family was what his children, grandchildren, great grandchildren, nephews and nieces recall most. Before Kathryn’s death they loved traveling together; they enjoyed their trips abroad to explore Europe, Jamaica and Mexico as well as many months of March in south Florida. Their love of travel was launched with a honeymoon and shore leave rendezvous in New York City, home port for Elvin’s ship.

Elvin was preceded in death by his beloved Kathryn, his parents Ralph and Zora Perkins; brother Ralph Perkins and sister Louise Byer Perkins.

Cremation wishes have been fulfilled. A Memorial Service will be held 1:30 PM on Saturday, February, 27 at the Emporia Presbyterian Church, Downtown, 802 Commercial with a reception to follow at the Emporia Art Council, 815 Commercial. Private family inurnment will be in Memorial Lawn Cemetery, Emporia Kansas. A remembrance service will be held at Santa Marta Retirement Community at a later date.

In lieu of flowers, the family requests memorial donations be made to the Emporia Community Foundation- Fund for the Future. Those may be made on line or ECF, 527 Commercial Ste 501, Emporia, KS 66801. Arrangements by Signature Funerals, Kansas City, MO. 816-214-5174.

Child of Christopher Dickinson and Mary (?)

Francis and Edna were enumerated in the 1930 Osage City, Osage Co., KS, federal census. He was a dentist, age 41, she was 34. Children in the household were Katherine 6, Frances E. 5, and Joan, 2 years 1 month. Also in the household was Francis' father, John, age 76.

b. 4 February 936
Dixie Lois Ashton was born on 4 February 936.1 She was the daughter of Earle Wesley Ashton and Mary Belle Evelyn Humphrey.1

Child of Charlotte Case and (?) Brockway

Lucy Brockway was the daughter of (?) Brockway and Charlotte Case.

Children of Emma (?) and Albert Holcombe

Willard Mitt Romney was born on 12 March 1947 at Detroit, Wayne Co., MI.1 He was the son of George Wilcken Romney and Lenore LaFount.1