Isaac and Olive were enumerated in the 1850 Concord, Jefferson Co., WI, federal census. He was a farmer, age 28, she was 25. Children in the household were Merream 5, Chauncey 3, and Cinderilla 1.

John Holcomb(e) (1804 - 1884) and his wife, Emily Jewell Holcomb and family came from Orleans Co., N.Y., in the forties and settled in Sec. 25 on the shore of Green Lake. Emily Jewell traced her ancestry to thomas Jewell who, at the age of 27, came from England to Massachusetts in the ship, Planter. He settled at Braintree where eh died leaving a will on record. On her mother's side she descended from Capt. Richard Stroud (1746-1819) of New London, Conn. His wife was Elizabeth Billings (1750-1833). When the British burned New London in 1791 Capt. Stroud was at sea. His wife put the silverware in teh well, and with her baby in her arms, accompanied by five other children, walked 30 miles to Stafford. One of those children, fanny Stroud, later married Jonathan Jewell -- the parents of our Emily Jewell. Her family moved to Murray, N.Y., where she married John Holcomb in 1833. They had five children: Frances, Mrs. Peter Shamp, Lincoln, Neb; Amy, who died young; Richard Billings; Julia; and John, who married Jane Niblack and went to Nebraska where they left many descendants. At her death, the body of Emily J. Holcomb was returned to New York for burial.

b. circa 1839
Sophrona Holcombe was born circa 1839 at OH.1 She was the daughter of Webster Holcombe and Abigail Perkins.1

Child of Harley W. Smith and Lillie May Austin

b. circa 1787
Hannah (?) was born circa 1787. She married Laomi Holcombe, son of Noah Holcombe and Jerusha Buttolph.

Children of Hannah (?) and Laomi Holcombe

b. 1840
Caroline Baker was born in 1840. She was the daughter of Thomas Baker and Mary Ann (?) Caroline Baker married John Holcombe, son of Laomi Holcombe Jr. and Patience Pelton. 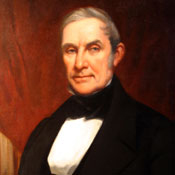 Anson G. Phelps's, mother died when he was 12 years old, and it is said that he was brought up in the house of the minister of Simsbury. 13 Oct., 1799, Anson Greene Phelps made choice of Thomas Woodbridge Phelps as his guardian. On May 5, 1799, the two brothers Thomas Woodbridge and Anson Greene Phelps were admitted to the Church in South Canton, the Rev. Jeremiah Hallock being pastor.

A few years after the three brothers, William, Thomas and Anson, and their cousin Job Phelps, left Simsbury, the first three settling West, while Anson G. Phelps settled in Hartford.

After settling in Hartford his first successful mercantile operation was in manufacturing a large number of saddles and shipping them South. At this time horse-back riding was the general mode of travel there. This, his first enterprise, was a very successful and profitable one. He continued to be a successful manufacturer and merchant in Hartford and erected a large brick building on North Main street, known as. "Phelps Block."

In 1812 Mr. Phelps removed to New York City and was associated in business with Elisha Peck under the firm name of Phelps, Peck & Co. They dealt in metals, iron, brass, etc.

Sheldon Smith induced him to invest in the industrialization of the area of Derby that came to be called Birmingham. Settled in 1651 as part of Derby, Ansonia was founded (1844). Thwarted in his efforts to expand his business farther north, he instead settled on the east bank of the Naugatuck River in what is now downtown Ansonia. That area might have become "Phelpsville", except that there was apparently another town by that name, so the new industrial village came to be called Ansonia.

Ansonia, (1990 pop. 18,403), of New Haven Co., Connecticut, on the Naugatuck River. Today it is a center for manufacture of plastics, latex foam, electronics, automatic screw machine products, and novelties.
Mr. Peck's father removed from Berlin, Ct., to Lenox, Mass., late in the last century. The descendants of this family are now one of the first families of Pittsfield.

They were successful and prosperous in their operations and accumulated a large fortune. This firm was dissolved about 1828, and Mr. Phelps organized the now well-known house of Phelps, Dodge & Company, composed of Anson G. Phelps, his son-in-law William Earl Dodge, and others of his relations.

Mr. Phelps's mercantile life was one of great prosperity, while he and his partner Mr. Dodge were acknowledged in the great mercantile community of New York as the type of Christian merchants.

Both were members of Dr. Spring's church, and the firm of "Phelps, Dodge & Co.," soon became everywhere identified with the interests of the Presbyterian church. Mr. Phelps's high standard of mercantile morality, his deep personal piety and decided interest in all good words and works, rendered him a tower of strength in the cause of Christ, and these qualities of head and heart, found their natural and joyous expression, in deeds of systematic benevolence, and in the promotion of philanthropic enterprises.

The "American Bible Society," the " American Board of Commissioners for Foreign Missions," the "American Home Missionary Society," the "Colonization Society," the "Blind Asylum " of New York City, all received his support, and of all of which he at one time was president. Many other societies and charitable institutions were largely aided by him during his life, and many of them generously remembered in his will. Among others his native town of Simsbury received $1000 for the poor. He may well be called the princely and philanthropic merchant of New York City, while the following memorial verses of Mrs. Sigourney thus fitly characterize the secret of Mr. Phelps's life

"The cares of commerce and the rush of wealth Swept not away his meekness, nor the time To cultivate all household charities; Nor the answering, conscientious zeal To consecrate a portion of his gains To man's relief and the Redeemer's cause."

The following clause of Mr. Phelps's will is characteristic of, and peculiarly illustrates the whole of his life.

"I give and bequeath to each of my grand-children, living at my decease, the sure of $5,000, to be paid them as they severally attain the age of 21 years. This latter bequest I direct to be accompanied by my executors with this injunction:-That each of my said grand-children shall consider the said bequest as a sacred deposit, committed to their trust, to be invested by each grand-child, and the income derived therefrom to be devoted to spread the gospel, and to promote the Redeemer's kingdom oil earth, hoping and trusting that the God of Heaven will give to each of that wisdom which is from above, and incline them to be faithful stewards, and transmit the same to their descendants, to be sacredly devoted to the same object.
I know this bequest is absolute and places the amount so given beyond my control; but my earnest hope is that my wish may be regarded as I leave it, an obligation binding simply on their integrity and honor.''

Mr. Phelps died at his residence, formerly the Coster place on the East River, 30th Nov., 1853, in his 73rd year, and was buried in his family lot in Greenwood Cemetery.

A sermon by the Rev. George L. Prentice was given at the Mercer Street Church, 11th Dec., 1853, on account of the death of Mr. Anson G. Phelps.

b. July 1867
Lucetta Baker was born in July 1867.1,2 She was the daughter of Aaron Baker and Rosina Holcombe.1 Lucetta Baker married Major Shadford Breckenridge on 26 February 1884.2

William Earl Dodge (1805-1883), was a New York businessman, referred to as one of the "Merchant Princes" of Wall Street in the years leading up to the Civil War. Dodge was also a noted abolitionist, and Native American rights activist and served as the president of the National Temperance Society from 1865 to 1883. Dodge represented New York in the U.S. Congress in 1866-67 and was a founding member of the Young Men's Christian Association (YMCA).

Dodge was born in Hartford, Connecticut, the second son of David Low Dodge, founder of the New York Peace Society, and his wife Sarah Cleveland. His wife was Melissa Phelps (1809-1903), the daughter of Anson Greene Phelps and Olivia Egleston. In 1833, Dodge and his father-in-law founded the mining firm Phelps, Dodge and Company, one of Americas foremost mining companies.

Dodge is the namesake of Dodge County, Georgia. A consortium of businessmen led by Dodge purchased large tracts of timberland in this area following the Civil War. They built the Macon and Brunswick Railroad, connecting Macon to what was then a remote area of the state. Dodge County was formed in 1870 and Eastman, the county seat, was established at the railroad's Station Number 13. Dodge visited the area only once, to dedicate a two-story courthouse that he donated to the county. Dodge's sons later administered the timber businesses in this area. The consortium's ownership of these lands led to land wars which resulted in nearly fifty years of court cases.

Dodge was active in the post-Civil War Indian reform movement. He joined Peter Cooper in organizing the privately funded United States Indian Commission in 1868 and helped institute Ulysses S. Grant's Peace Policy toward the Indians. In 1869, Dodge toured Indian Territory (present-day Oklahoma) and Kansas as a member of the government-sponsored Board of Indian Commissioners. He met and discussed U.S. Indian policy with representatives of the Cheyenne, Arapaho and Kiowa. Dodge lobbied for the prosecution of the U.S. cavalry commanders responsible for the 1870 Massacre of the Marais in Montana, which left 173 Blackfeet dead. Dodge unsuccessfully campaigned to establish a cabinet level department for Indian Affairs. He also used his influence in Washington on behalf of Indian educational programs and the General Allotment Act of 1887. A monument to William E. Dodge stands on the North side of Bryant Park.

An Army Air Corps veteran of World War II, Ray was well known in the area as founder and owner of Ray S. Holcombe Real Estate, South Windsor's first independent real estate company. He also served the town as a member of the Industrial Development Commission and as president of the Rotary Club. In addition, Ray was a longtime member of the South Windsor Chamber of Commerce and of Wapping Community Church, and was an elder at Venice Presbyterian Church.

Ray was born on Christmas day, 1920, in Nocatee, FL. In the mid-1920's the family moved to East Hartford, where Ray met Beverly Westbrook, his future wife. Ray graduated from East Hartford High and Hillyer College (now the University of Hartford) and attended West Virginia Wesleyan with his older brother, Ralph (predeceased).

Widowed after 38 years of marriage, Ray remarried in 1981 and spent 25 years with his wife Clare in Venice, FL. In addition to his wife, Clare, Ray leaves behind many friends and relatives. Beyond his Rotary Club, business and church friends, Ray leaves his son Kirby of Rangeley, ME; son Jeff, daughter Pam Beaudry, and daughter Willa Bulkley, all of South Windsor; his son Steven Hayes of East Hartford; daughter Laurie Pooler of Dickson, TN; and daughter Sue O'Reilly of Croton on Hudson, NY; his brother, Dick and his sister, Gail Van Scoter, both of Florida. In addition, Ray leaves ten grandchildren, two great grandchildren, and numerous nieces and nephews.

Calling hours will be held Sunday Nov. 26 from 3-6 p.m. at Samsel & Carmon Funeral Home, 419 Buckland Road, South Windsor. The funeral will be held Monday, 11 a.m., at Wapping Community Church, 1790 Ellington Road, South Windsor. Burial will be in Wapping Cemetery. In lieu of flowers, donations may be made to the stroke research division of the American Heart Association, 2550 US Highway One, North Brunswick, NJ 08902.

b. circa 1836
Emily Holcombe was born circa 1836 at OH.1 She was the daughter of Jonathan Holcombe and Huldah Rouse.1