Stephen and Caroline were enumerated in the 1860 Dorchester, Norfolk Co., MA, federal census. He was a Unitarian Clergyman, age 51, she was 46. Children in the household were Ellen 15, and Annie 13.

Child of Elizabeth (?) and Theophilus Parsons

b. 9 March 1825
Charlotte Elizabeth Phelps was born on 9 March 1825 at Hadley, Hampshire Co., MA.1 She was the daughter of Charles Porter Phelps and Charoltte Parsons.1

b. 13 March 1827
Susan Davis Phelps was born on 13 March 1827 at Hadley, Hampshire Co., MA.1 She was the daughter of Charles Porter Phelps and Charoltte Parsons.1

Born Moses Porter Phelps, began calling himself Charles about the time he went to Harvard.

He was partially fitted for college by Rev. Joseph Lyman, D.D., of Hatfield, Mass., and graduated with high honors at Harvard University, the class of 1791. He pursued his legal studies under the instruction of Hon. Theophilus Parsons, of Newburyport, Mass (father of hsi second wife). On his admission the bar, in 1795, he established himself in Boston, and attained to a high rank in his profession. During the later part of his 2nd year’s residence in Boston, he was engaged in mercantile pursuits.

In 1815, he was chosen a representative from Boston to the state legislature. In 1816 and 1817 he was commander of the celebrated company of cavalry, well remembered by the elder portion of this community as the Hussars, being the immediate successor in command to the Hon. Josiah Quincy. This company paraded for the last time on the occasion of the visit of President Monroe to Boston, in June, 1817, and was soon afterwards disbanded. In 1816, Mr. P. was appointed cashier of the Massachusetts Bank, in Boston. This office he resigned the following year, when he returned to the estate inherited from his father, in Hadley, where he passed the remainder of his long life, highly respected by the community, who manifested their regard for him by repeatedly electing him to offices of honor and trust.

Of commanding form and bearing, of abilities which acquired the respect, and integrity which secured the confidence of all, Mr. P. was for more than half a century an acknowledged and consistent disciple of Christ. Among his neighbors, his clear judgment and high principle caused him to be often consulted on matters of doubt or dispute. The affection of his family was blended with deep reverence.
His mind retained its powers till the close of life, and among his last words were expressions of the faith that looks beyond the grave.4 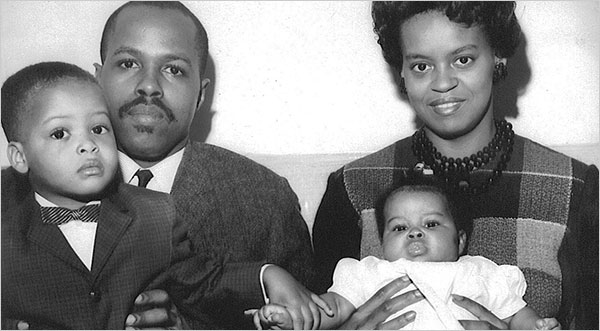 Photo from the Obama Campaign published in the NY Times
Marian Lois Shields was born on 30 July 1937. She was the daughter of Purnell Nathaniel Shields and Rebecca Jumper.1 Marian Lois Shields married Fraser Robinson III, son of La Vaughn Johnson.

Edward Wilson Case, 93, of West Hartford, husband of the late Marjorie (Luckingham) Case, died Saturday, (January 22, 2000), at Brookview Health Care Facility. Born in North Canton, he was the son of the late Wilson and Rhilda (Brown) Case. During the late 20's and early 30's, heplayed semi-professional baseball with the Hartford Red Socks and worked for Colt Patent Pirwearms early in his career.

In 1938, he started in the lettering business and was theowner of Bristol Lettering, which he operated for most his working life. Mr. Case was instrumental in organizing and was an active supporter of the West Hartford alumni Baseball League.

He is survived by his three children, Edward E. Case, Richard A. Case, and Beverly C. Parker, all of West Hartford; seven grandchildren; and eleven great-grandchildren.

Funeral services will be Wednesday, 10 a.m., at the Taylor & Modeen Funeral Home, 136 South Main Street, West Hartford. Burial will follow in Fairview Cemetery. Friends may call at the funeral home, Tuesday, 7-9 p.m. Memorial contributions may be made to a charity of the donor's choice.

From a web page created by Roberta Bywater Lusa:

I don't know much about Floyd's mother, I believe Grampa's relationship with her was not good. When he was in the Navy he sent home money to her to save for him, but instead she used it to pay tuition for his younger brother to go to college. I've been told Wilfred, Floyd's father, was a big drinker and shot himself in the mirror when he was young. The one time I met him, he was a very old man. He was sitting on his back porch in the sun reading a book. There were paperback novels all over his house. Grampa's father, Wilfred, married two more times, once to Nettie, and after her death, to Agnes. Nettie was fondly remembered by Floyd and Sarah, and was a grandmother to Leroy. Wilfred owned a piece of property on the shore and they had an old bus on it which they lived in while there. My dad, Leroy, recalled many happy times there. The property was completely removed in a storm and was no more.
Grampa's brother, who was one year younger, was a chemical engineer. He had one son, George. Grampa and his brother died one week apart, at the ages of 91 and 92. Neither knew the other was sick. Ada and Atla both married but had no children. One of their husbands was a well to do builder. All four of the siblings died of bladder cancer.
Edwin and Annie Bywater, Grampa's grandparents, were caretakers at the reservoir in Middletown. This was a probably a political appointment because Edwin fought in the Civil War. When they were young, Edwin used to get drunk and Annie would tell the children to hide when he would come home late at night.
Grampa's Aunts, Lucy and Emmy lived in the Middletown area. Emmy married Uncle Albert and the three of them lived together their whole life. Sometimes, in the 1950s, Sarah would pick them up for a few days for a visit. At the time they were in two different old age homes. Both were converted mansions and were very nice, with elegant dining rooms. When they visited we would sometimes have kidney stew, which I liked very much. It was a brown gravy served over mashed potatoes. I was told that kidneys were free when the Bywater family was young, and because there wasn't a lot of money it was a family favorite. Another favorite food was suet pudding. It wasn't like what we think of as pudding today. It was like a steamed bread. You will find the recipe on my genealogy page. It was a bit like stuffing, served with gravy, but not a lot like stuffing. We all loved it at the holidays. Floyd always used to make the pudding. Uncle Tom and Aunt Bertha used to visit Gramma and Grandpa, perhaps once during the summer. He was a big round man with a completely bald head, not even a fringe. He would wear a nice dark suit and Bertha would wear a nice dress when they visited.

From a web page created by Roberta Bywater Lusa:

Leroy was the first son born to Sarah and Floyd Bywater. When he was born they lived with Leroy’s grandmother, Rilda, his Aunt Esther and Uncle Edward, in five rooms on one floor of a two family in West Hartford that Rilda owned. Floyd, Sarah and their sons eventually had their own flat in the house. His brother wasn’t born for eight years, so he was the little “star” for a long time. He was the first grandchild on the Bywater side of the family also.

Throughout his life he told me about his activities as a child. One of the funniest stories he would tell me was about swimming in Trout Brook with other boys from the neighborhood. They would swim nude, and when they finished swimming, still in the nude they would sit around and play cards. He told me about bringing home junk from the dump to make things from . . . sometimes he said it would be the same stuff my grandfather had disposed of earlier. He would use his lunch money to buy day old bakery. Or, he would save his lunch money and eat after school when he got home. Sometimes he would go camping for most of a week. He would make a leanto for sleep and his grandmother would bake him a pot of beans for the week.

In his early twenties he started racing motorcycles. At one time he rode a motorcycle through a flaming hoop. Eventually he had a horrendous accident and had a concussion which kept him in a coma for a week. He gave up motorcycle riding shortly after that. My mother and dad met and married while he was in his motorcycle years.

He tried farming. He worked part time as a lumberjack, on tobacco, and in a factory. Finally he settled into the electrical business with my grandfather. He took courses at night school. He was a hard worker and was promoted from field work into the office as an estimator.

For 15 years he ran his own successful electrical business full time. When he married for the second time at the age of 53, he went into semi-retirement, working from June to October and spending winters in Florida. Full retirement came at age 62. His health, which had been quite good prior to 2000, declined rapidly from that time until his death at age 88 in December of 2004.

My Father was the patriarch of our extended family. We thought of him as the most successful person in the family, and therefore, looked to him for approval. Up until the time he went into semi-retirement he worked seven days a week, from dawn into darkness. He ran his home and business frugally and denied himself not only luxuries, but small comforts he could have well afforded. He was proud of the large estate he accumulated, the product of a lifetime of work, self denial, and shrewd money management.

Child of Theophilus Parsons and Elizabeth (?)