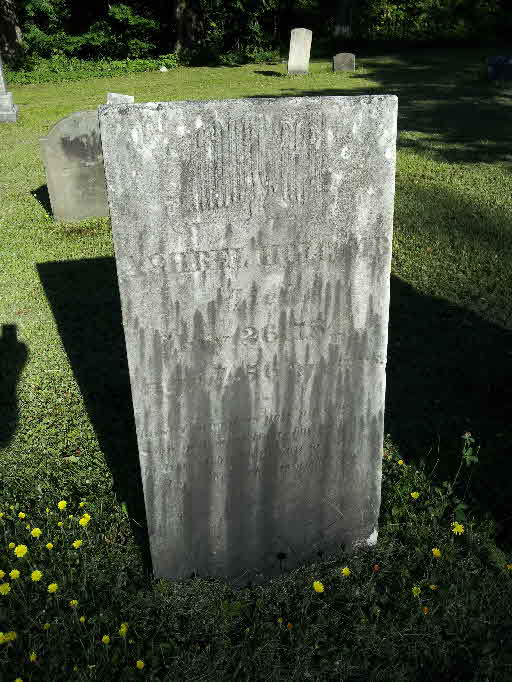 Served as a private in Captain Isaac Phelps, Jr.'s Co., of Connecticut Militia (War of 1812).

This is probably the Asahel listed in "Connecticut Pensioners of 1835" listed as from Hartford Co., Private.

Lucy was enumerated in the 1850 Colesville, Broome Co., NY, federal census, page 27, with daughter Lucy Ann. They were living next door to Edwin. 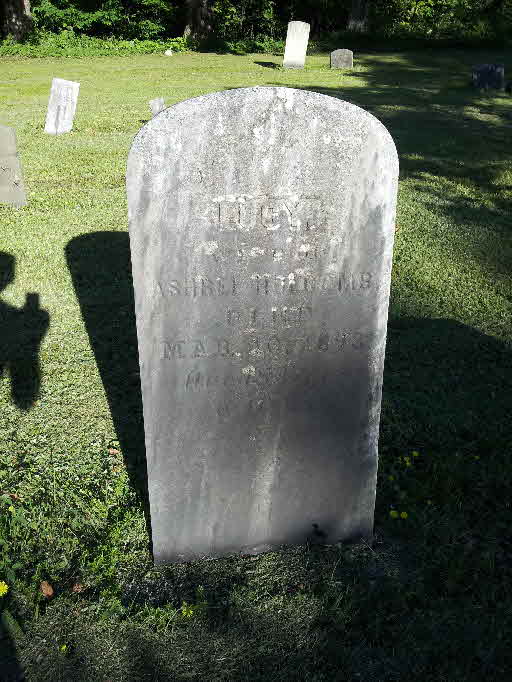 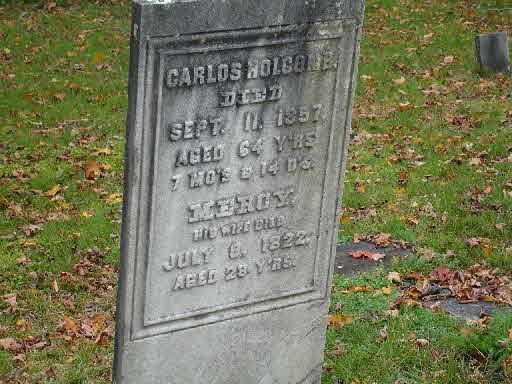 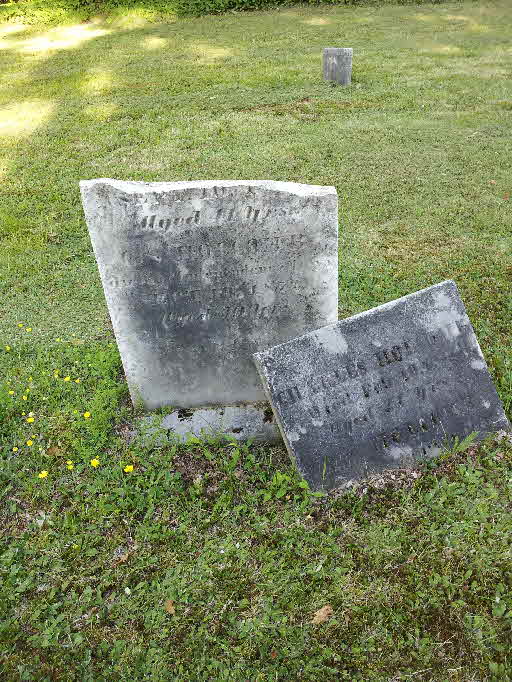 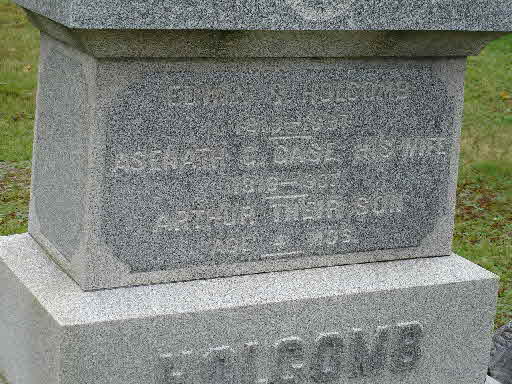 
Edwin and Asenath were recorded in the 1850 Colesville, Broome Co., NY, federal census, page 27. He was a farmer age 28, she was 24. Children in the household were Manda 10, Ellen 8, Sidney 4, and Sarah 1. Mother Lucy and sister Lucy Ann were enumerated next door. 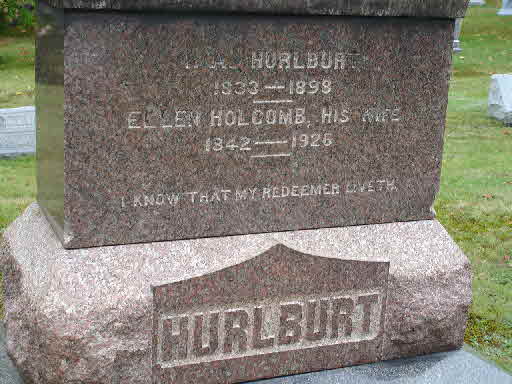 Sidney and Jane were enumerated in the 1875 Colesville, Broome Co., NY, state census. He was a farmer age 29, she was 27. Children in the household were Mary E. 3, George C. 2, and Edwin F. 1. His parents were enumerated next door.

1850-1860 Census in Colesville, Broome Co., NY. Also The Hurlbut Genealogy, or Record of the Descendants of Thomas Hurlbut, of Saybrook And Wethersfield, Conn., who came to America as early as the year 1637. With Notices of Others not Identified as his Descendants by Henry H. Hurlbut, Joel Munsell's Sons, Albany, NY, 1888, p238. Malcolm Douglas Hurlburt married Lucy Ann Holcombe, daughter of Asahel Holcombe and Lucy Holcombe, on 3 October 1852 at New Ohio, NY.

Their descendants settled on Cash Creek in Ulster, Bradford County, PA in 1793. He was enterprising and early on erected a saw-mill on Cash Creek, which supplied the lumber for the first plank houses in a large section of the county. The saw-mill and corn-mill were in operation about 1795.


I have a 1901 reunion report from Bradford County PA. In this document which covers several families, LeRoy and Ulster are in the center of this report. In the LeRoy, PA, grave yard there are many Holcombs from the Eli Holcomb family. Eli and Hannah Crofut Holcomb are buried in Ulster PA several miles away. I have visited Bradford county several times with my camera; several years ago a giant tree dropped on top of Eli and Hannah's graves and the stones are a mess. On a 10-speed bike ride from CT about 1973 I photographed the stones and Eli's DAR monument when they were upright and the tree was still there.


The papers say that Eli took most of his family about 1793 (that part of PA was Connecticut's Western Reserve at that time) and settled there with Sterling, Hugh and many others.


What is now Ulster township was originally a part of Sheshequin, but the latter town was soon of such importance that it was deemed best for Ulster to separate which it early did. It was settled about 1784, and among the settlers of early date may be mentioned Captain Benjamin Clark, Nathaniel Hovey, Adrial Simons, Solomon Tracy, Eli Holcomb, Isaac Cash, Abram Parmeter, Chester Bingham, Thomas Overton, Elijah Granger, Leonard Westbrook, and Joseph C. Powell. Nearly all of these men, if not all have descendants now living in Bradford County. Sometime about 1822 the Scotch emigration commenced, and the familiar names of Mather, Pollock and Dickson are associated with those of the older settlers of which is now prosperous Ulster. (from the Bradford County usgenweb page.)


Eli served in 1775 and received a bounty coat, I have been trying to place him at Bunker Hill for his service in April-June 1775, a few months after Concord and the start of it all.

From Carol Laun: Ezekiel was a veterinarian and Revolutionary War Vetran. He was married twice. He lived at 81 Petersen Road in Granby. The house was later torn down by his son James, who built a new house. This house was, in turn, rebuilt by Danish immigrant Peter Peterson in 1902.

Proof of Ezekiel Holcomb’s first marriage to Elizabeth Gillet is found in her mother’s will dated 1805. Elizabeth (Hayes) Gillet left $1 to her grandson Ezekiel Holcomb Jr., the only grandchild mentioned in the will.
7

Some of the information on the line of Ezekiel down to John Noble Holcombe is provided by Wadean Holcombe, 41997 Holcomb Rd., Richland, OR 97870; she cites a family bible held by Dale Holcombe in Bethpage, NY.

Most of the dates for this family come from this bible. It starts with his marriage to Jemima. The Bible calls Jemima and her daughter - Jamime. The bible only lists four childlren - Heman, Jemima, James A. and Phares. Since the bible does not list Susannah in this family, she must have been born prior to 1765 when her mother Elizabeth died. 7

Abner J. and Martha were enumerated in the 1850 Huntington, Gallia Co., OH, federal census. He was a farmer age 36, she was 38. Children in the household were William W. 9, Orinda 7, Carson 5, and James B. 3. Abner's brother Reubin lived next door.

Information on only 7 of their reported 15 children were found. The first 7 children are accounted for in the census, but only the first 4 were recorded in the Family Bible. One child, Gabriel, died when he was 2. There was a 5/6 year gap between Sarah and Reuben.

They were in Iowa in 1853 where his sister and family, the Dodrills, were living and they were in Missouri before 1858. In the 1860 census, the family was living in Summersett Township, Mercer County, Missouri. Andrew was farming.

Family history states that John Wilds opened the first coal mine in West Virginia. This family moved to McLeod County, Minnesota from Ohio in 1872.

Amanda Holcombe was the daughter of Reuben Wetmore Holcombe and Rebecca Niles.

Russell and Esther were enumerated in the 1850 Huntington, Gallia Co., OH, federal census. He was a farmer, age 26, she was 28. Children in the household were Reuben 7, John 5, and alexander 1.

ENOCH R. DICKERSON is the son of John and Mary (Russell) Dickerson both of whom are deceased. Enoch was born in Jackson County, September 5, 1822. Mahettable Holcomb became the wife of Mr. Dickerson in Huntington Township, August 15, 1840. She was born in this county March 5, 1822.
They have the following children: Reuben H., November 17, 1841, deceased; John W., February 14, 1844, deceased; Thomas A., May 31, 1849, resides in Hamden, Ohio; Niles N., April 22, 1851, deceased; Riley R., August 22, 1853, deceased; Rebecca, March 22, 1857, resides in Hamden, Ohio; Enoch R., April 9, 1860, resides in this county; Sarah Ann, July 10, 1863, resides at home. The parents of Mrs. Dickerson are Reuben W. and Rebecca (Niles) Holcomb, settlers of this county in 1811.
The oldest son of Mr. Dickerson, Reuben H., enlisted in Company H, 27th Ohio Volunteer Infantry in 1862. He served about six months and was discharged for disability. He reenlisted in 1864, was taken sick at Nashville and died the same year. John W., another son, enlisted January 23, 1864, and was discharged April 17, 1865 at Camp Dennison. He was wounded July 4, at the battle of Kenesaw Mountain. He was sent to the hospital, but was afterward sent home, where the wound caused his death. Mr. Dickerson was elected school director in 1855 for three years. He is a resident of Huntington Township, where he is engaged in farming. His postoffice address is Alico, Gallia County, Ohio.

b. 1832
Sarah A. Holcombe was born in 1832. She was the daughter of Reuben Wetmore Holcombe and Rebecca Niles.