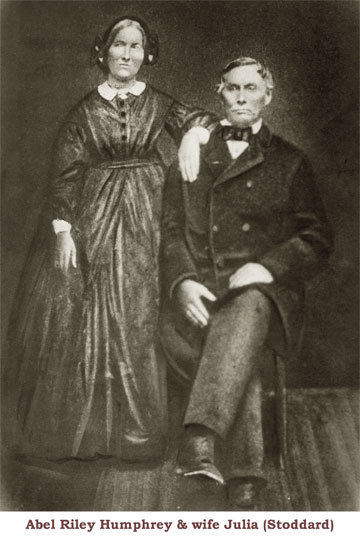 Abel and Julia were enumerated in the 1870 Waterville, Pepin Co., WI federal census. He was a farmer age 65, she was 66. Children in the household were Lafayette 28, and David 26.

Charles graduated Yale, 1851, taught in Bennington, VT, 1851-54; moved to Muscatine, IA, 1855; lawyer and literary pursuits there; later lived Des Moines where he was a scientific writer, specializing in articles on improvement in live stock raising in the West; composer of music. 3

George and Ada were enumerated in the 1860 Galesburg, Knox, Co., IL, federal census. He was a college professor, age 31, she was 28. Children in the household were Milton 4, and Mary 4 months. Also in the household was D. Hays, 18, a student, apparently Adeline's brother, Daniel.

There are signifigant differences between the census records and the record of McPherson. It may be that Adeline died and that Ellen is the second wife. The 1880 census may offer clues

William was US. Consul at Macao, Amoy and Canton, China 1862-63. President of Northwestern University in 1883; Associate Editor, Chicago Inter-Ocean.

Edward was a lawyer and stock-reeder, Red Oak, IA. He studied at Yale University to junior year, class of 1857.

John and Kate were enumerated in the 1880 Red Oak, Montgomery Co., IA, federal census. He was in real estate, age 42, she was 31. Children in the household were Carleton 5, and Mary 2. Living next door were Kate's parents Samuel C. and Sarah.

Daniel graduated from Knox College in Galesburgh, IL, in 1863; was a breeder of hourses and real estate agent at Low Run Stock Farm.

Lydia graduated from and taught at Female College, Northwestern University. She and James went to India as missionaries for their life work. Frances E. willard published in may 1873 a memoir of Lydia as school mate and devoted friend. 3

Ada was probably the daughter of L. H. and Catherine Stone, recorded in the 1850 Muscatine, Muscatine Co., IA, federal census. She was listed as age 7.

b. 28 August 1859
Lydia Luella Jones was born on 28 August 1859.1 She was the daughter of William Patterson Jones and Mary Elizabeth Hayes.1

Private Lyle E. Coonrod was a member of the 47th Infantry, 9th Division, and is buried in the Netherlands.