b. circa 1880
Arthur Milford Wing was born circa 1880 at MN. He married Grace Josephine Dow, daughter of James Osgood Dow and Mary Charlotte Hawkinson, in 1903.1

The "first lady of rock," the powerful-voiced female singer in Jefferson Airplane, Jefferson Starship, and Starship.

MRS. IRENE LANDERS BELCHER Mrs. Irene Landers Belcher died May 23rd in Macon, Georgia after a brief illness. She was a devoted housewife and mother. Irene was reared in Tallulah Falls, Georgia and spent her adult life in Atlanta. She moved to Macon in January to be nearer her oldest son, Dr. Larry Landers. She was a long time member of The First Christian Church of Atlanta, where her late husband, Mr. Clarence Belcher, was chairman of the Building Committee. She is survived by her three sons; Dr. Larry Landers, of Macon, GA, Dick Landers of Nashville, Tennessee and Richard Belcher of Atlanta; eight grandchildren and three great grandchildren, as well as two sisters; Barbara Martin and Virginia Deavers, both of Gainesville, Georgia. Funeral services will be held at First Christian Church of Atlanta on Tuesday, May 25th at 1:30 PM with interment to follow in Arlington Memorial Park. The family requests that in lieu of flowers, any memorials be sent to First Christian Church at 4532 LaVista Road, Tucker, Georgia 30084. at HM Patterson & Son, Oglethorpe Hill at 4550 Peachtree Road, 404-261-3510.

Child of Frances A. Snodgrass and James A. Noble

Auverne and Emma were enumerated in the 1920 Marilla, Manistee Co., MI, federal census. He was 73, she was 55. The only child in the household was Henry T. 30. They were living next door to son Elijah. (viewed at ancestry.com however the page seems to say "Norman Twp.")


The widow Emma was enumerated in the 1930 Custer, Mason Co., MI, federal census in the household of her son, Elijah. Also enumerated was another son, Henry, age 40. 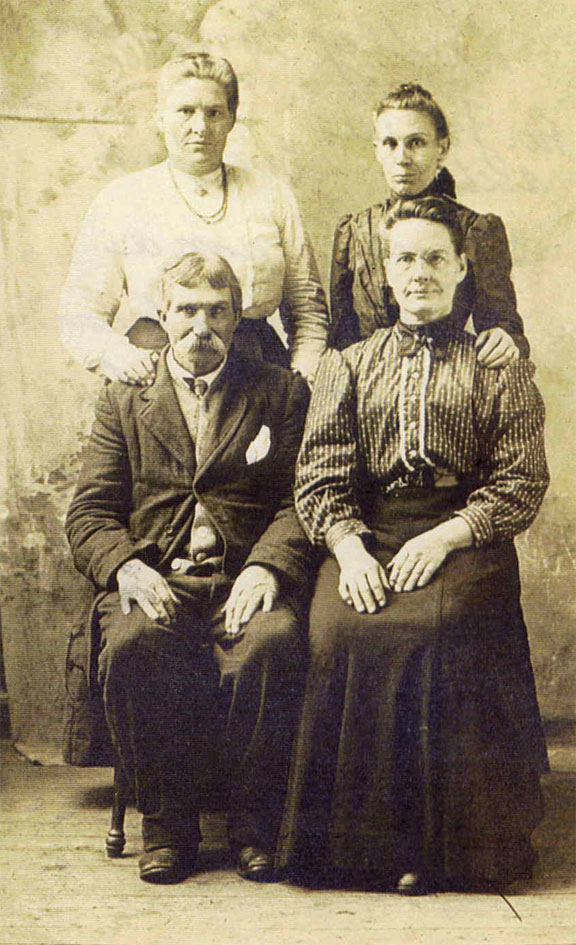 Mrs. Julia Arminia Langford died at 11:30 pm sunday in her home at 1008 Avenue B, Rock Falls, following an extended illness. She had suffered from a complication of diseases for three years and was bedfast the past four months.

The body will be removed to the Langford home from the Melvin funeral home late this afternoon. Funeral rites will be held at 2 p.m. Wednesday in the home with Rev. H. E. Shiffer of the Rock Falls Christian church, officiating. Interment will take place in the Walnut Cemetery.

Mrs. Langford was born January 20, 1871 in Amboy and at the time of her death was 66 years, 11 months and 19 days old. She had lived in Rock Falls for 18 years. Besides her husband, John Langford, she leaves one son and two daughters, Arthur Langford, Mrs. M. A. Price and Mrs. Blanche Signor, all of Rock Falls and two sisters, Mrs. Belle Hanrahan of Harmon and Mrs. Emma Holden of Custer, Mich. One sister, Mrs. Dollie Tompkins and a brother, Charles Holcomb, preceded her in death. There are five grandchildren and one great grandchild surviving.

b. 1873
Isabel Holcombe was born in 1873.1 She was the daughter of Henry Holcombe and Louisa Snodgrass.1

Charles and Julia were enumerated in the 1900 South Dixon, Lee Co., IL, federal census. He was 43, she was 49. They had been married 16 years and had three children all still living: Fredrick 15, Jennie 12, and Nellie 11. The census indicates Charles was born in May 1857, which disagrees with his death certificate.


Charles and Julia were enumerated in the 1910 Coloma, Whiteside Co., IL, federal census. He was 53, she was 60. The only child in the household was Nellie, 20.


Sheila Smith indicates that Charles was born in New York, but both the 1900 and 1910 census records indicate he was born in IL.

Charles Holcomb, sixty-two years old, died at the home of his daughter, Mrs. Walter riley, on East Seventh street, Rock Falls, at 12:28 this afternoon. Mr. Holcomb is an old resident of Rock Falls and has been in poor health for the past year and bedfast for the past two months.

from an unknown book:

Fred and Anna . . . were married in Case County, Iowa, July 24, 1907, and first came to Yuma in or about 1911. their homestead shouth of Yuma was where they made their home. Their homsetead later became a part of hte Allen Ranch. Anna's brothers, Hank and Pete Bannick, lived near Yuma.

They times may not have been easy, but Anna used to tell of the good friends they made, and the fun they used to have at the neighborhood meetings and the dances they had at each others houses, how the people would get together for barn raisings, how they just got together to help each other.

Before moving to the Yuma area, they lived at Atlantic, Iowa. this is where their first daughter, Lena, was born January 23, 1909. Fred worked for the railroad in Illinois and due to the fact that he was away from home an dhis family so much, they dediced to move to Colorado. After they moved to Colorado they were blessed with two more daughters, Ethel was born on December 10, 1912, and Ida was born may 7, 1914. Fred worked as night watchman for the town of Uyma and also served as a fireman for the Yuma Fire Department.

Their daughter, Lena was married to Frank Gisi of Yuma. they later moved to Illinois, where they made their home. Their caughter, Ethel, married E.L. Holmes September 12, 1928. the Holmes made their home in the Yuma area for a period of time. They also have their family history written in this book. Their daughter, Ida, attended Uyma Union High Schoo, an dfinished her junior year before she moved with her family to Rockfalls, Illinois. Ida married Leo Lauff of Rockfalls, Illinois.

On their move to Rockfalls, Illinois, Fred found employment with the R. B. and W. Wire Mill, and worked for them until the time of his death. Fred was always proud of his service on the Yuma Fire Department. He would be proud to know his great-grandson Oliver Dean Metzler was also a Yuma Fireman; as well as his son-in-law E. L. (Bud) Holmes.


from the Sterling Daily Gazette:

Funeral services will be held Wednesday at 2 p.m. in the Wheelock funeral home with the Rev. Joseph H. clyde, pastor of the Rock Falls Congregatiional church, officiating. Burial will be in Rock Falls Riverside cemetery.

Roy and Jennie were enumerated in the 1910 Coloma, Whiteside Co., IL, federal census. He was a carpenter age 27, she was 23. Children in the household were Ruth 3, and LeRoy 1 year 6 months.

From the Sterling Daily Gazette, 9 September 1960:

Jennie E. tompkins was born Oct. 21 1886 on a farm in Lee County, the daughter of Charles and Julia Holcomb. She was a member of the Rock Falls Congregational Church, The Rock Falls Woman's Club, Women's Relief Corps, Auxiliary of the Sterling Moose Lodge 726.

She was united in marriage to Roy Tompkins, Dec 20, 1905 at Morrison. The couple ived their entire married life in Rock Falls within one block of the family home.

She is survived by her husband; two daughters, Mrs. M. R. (Ruth) Kimmel and Mrms. Ralph (Helen) Charleston, both of Rock Falls; two sons, Leroy F. of Rock Falls and Floyd C., of Joliet; one sister, Mrs. Nellie Riley of Rock Falls; 18 grandchildren and nine great grandchildren, along with several nieces and nephews.

She was preceded in death by her parents; two sons, Paul and Albert, and one daughter Darlene; one brother, Fred Holcomb.

Funeral services will be Saturday 2 pm at the Wheelock-Allen Funeral Home with Rev. Harry E. shiffer, pastor emeritus of the First Christian Church of Rock Falls officiating, with burial in the Odd Fellows Cemetery, Rock Falls.

Mrs. Nellie Riley of 703 Ave. D, Rock Falls, died Wednesday evening in Community General Hospital at the age of 77 after a lengthy illness.

Mrs. Riley was born January 29, 1889 in Amboy the daughter of the late Charlie and Julia Van Buren Holcomb. She was united in marriage to Walter Riley in September of 1910. The couple lived in Rock Falls for many years. She was a lifetime member of the Rock Falls Congregational Church; the Friendly Class, the Rebekah Lodge, Royal Neighbors of America and the Woman's Relief Corps.

Funeral services will be Saturday 1:30 p.m. at the Wheelock-Allen Funeral Home with Rev. Donald Proctor, pastor of the Rock Falls Congregational Church, officiating, with burial in the Odd Fellow Cemetery, Rock Falls.

b. circa 1812
Philoman Gillette was also known as Philoman Gillett. He was born circa 1812 at VT.1,2 He married Olive Cordellia Holcombe, daughter of James Holcombe and Olive Noble, circa 1850 at possibly Washington Co., NY.1,3

b. 1841
Mary Russell was born in 1841 at NY.1 She was the daughter of Philoman Gillette and Olive Cordellia Holcombe.1

b. circa 1843
William Russell was born circa 1843 at NY.1 He was the son of Philoman Gillette and Olive Cordellia Holcombe.1

b. circa 1845
James Gillette was born circa 1845 at NY.1 He was the son of Philoman Gillette and Olive Cordellia Holcombe.1

Rennsalar L. Tompkins was the son of Leonard Tompkins and Eunice Shephard.