b. 1840
Franklin P. Wylie was born in 1840. He was the son of William P. Wylie and Charlotte French. Franklin P. Wylie married Anna L. Norton, daughter of Joseph Andrews Norton and Betsy Ann Hoppin, in 1863.

b. 1844
Anna L. Norton was born in 1844. She was the daughter of Joseph Andrews Norton and Betsy Ann Hoppin. Anna L. Norton married Franklin P. Wylie, son of William P. Wylie and Charlotte French, in 1863. 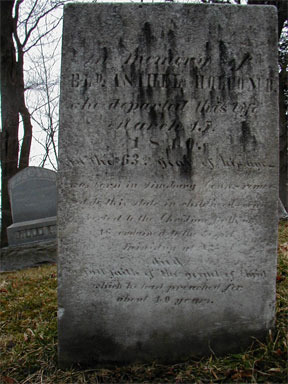 Asahel was a Baptist Minister from Greene and Chenango counties, NY.

The inscription on his monument reads:

"In memory of Elder Asahel Holcomb who departed this life March 15, 1840, in the 63rd year of his age. He was born in Simsbury, Conn., moved to this state in his childhood, converted to the Christian faith at sixteen and ordained to the Gospel Ministry at 23. He died in full faith of the Gospel of Christ which he had preached for forty years."

McPherson indicates that Maria was the first child and that Robert S. was the 9th without naming the other children. Adrian's record is from DAR applications.

Child of Leland Payne and Julia A. Butler

Child of Jennie N. Payne and Frank B. Day

Child of Frank B. Day and Jennie N. Payne

Child of Julia A. Butler and Leland Payne

Child of James B. Payne and Ellen E. Williams

Child of Ellen E. Williams and James B. Payne

Helen Payne was born at Franklin, IN. She was the daughter of James B. Payne and Ellen E. Williams. Helen Payne was a member in 1908 at DAR; 66578, Washington, DC.

Susannah Ott was born at Franklin, IN. She was the daughter of Dr. Lyman E. Ott and Eva Payne.

Jesse and Lura were enumerated in the 1860 Windsor, Ashtabula Co., OH, federal census, page 114. He was a farmer, age 70, born in CT; she was 59, also born in CT. Children in the household were Addison 34, Elvira G. 18, Demetrius 15, Albert 36 and his wife Elizabeth age 30 (with their two children Charles 6 and Elizabeth 1), and Clarissa age 28, certainly the widow of Harvey C. Alderman, followed by her three young children, Delmar 7, Wallace 4, and Ida L. 5/12. Delmer and Wallace were Harvey C. Alderman's children. Reuben was living next door. These dates bring into question the date of Harvey's death.

Jesse and Elura were enumerated in the 1870 Windsor, Ashtabula Co., OH, federal census, page 7. He was a farmer, age 80, born in CT; she was 68, also born in CT. Daughter-in-law, Elizabeth Brennan Alderman was in the household, she was 36 and born in Ireland. There were four children in the household, all born in Ohio: Lillie 11, Hoeber(?) B. 4, Alton 2, and Wallace 14 (probably the son of Harvey C.) Phares was living next door.

Marietta Brewer was born at Berkshire Co., MA. McPherson shows Oscar as "Oscar DICKENS"; DAR records are correct. She was the daughter of Squire Brewer and Emeline Bullard. Marietta Brewer was a member in 1908 at DAR; 68550, Washington, DC.