Louise Case Gaioni, 92, of Avon, wife of the late Frank Gaioni, died Friday, (May 18, 2012) at McLean in Simsbury. She was born November 4, 1919 in Simsbury, daughter of the late Harry Ripley and Emily (Shepard) Case and had been a resident of Simsbury and Avon. Mrs. Gaioni was an employee for the State of Connecticut prior to her retirement. She was a member of the Avon Congregational Church, enjoyed traveling and was an avid Yankees and UCONN girls fan. During her time at Mclean she enjoyed the many activities offered by the staff. She is survived by her daughter, Peggy Anderson of Avon; three grandchildren, Jesse J. Anderson and his wife Wendy Bauer Anderson of Guilford, Curtis F. Anderson and his wife Julie of Canton, and Elizabeth Anderson Harrington and her husband Todd Harrington of Simsbury; seven great-grandchildren; a brother and sister-in-law, John W. Case, Sr. and Barbara Case of Simsbury; a sister, Emily Luker; and several nieces and nephews. In addition to her husband, she was predeceased by her son-in-law, Jesse J. Anderson. The family would like to express their sincere thanks to the McLean staff and hospice team for the compassionate and loving care they provided for Louise. 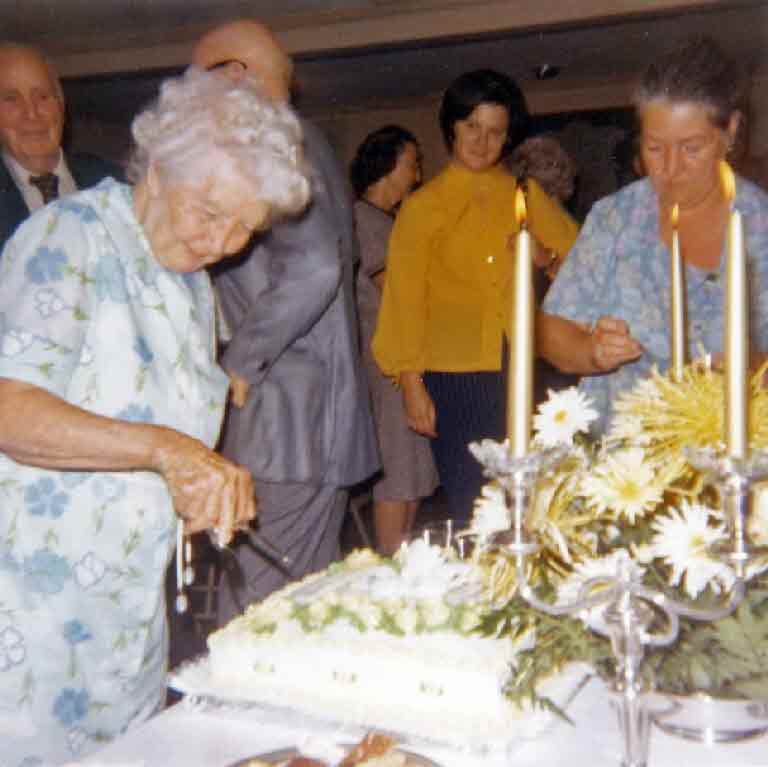 This photo is of Florence cutting the cake at 50th anniversary of the founding of the Windsor Historical Society at the 1971 celebration.

Florence (Loomis) Ellsworth, 103, widow of Philip F. Ellsworth, Sr., of Spring Street, Windsor, died Tuesday (Dec. 17, 1996) at her home. Born in Westfield, MA, July 24, 1893, to George and Mary (Sibley) Loomis, she lived in Windsor since 1918. She graduated from Mt. Holyoke College in 1915 and taught romance languages at Windsor High School until her marriage to Philip F. Ellsworth, Sr., in 1919. She was a member of the First Church in Windsor, Congregational and it's John Warham Society. She chaired the flower committee for many years and was a member of the booklovers group. She was the oldest living charter member of the Windsor Historical Society and a member of the Abigail Wolcott Ellsworth Chapter of the DAR. She was an active chairperson for parts of the pageant to commemorate the 300th Anniversary of Windsor in 1933. She leaves her son, Philip F. and his wife Carol J. Ellsworth, Jr. of Chester; a daughter, Mary E. and her husband J. Ford Ransom, Jr. of Windsor; seven grandchildren, Ann Northrop, George Northrop and his wife, Kate Collins, Scott and his wife Pam Northrop, Philip F. Ellsworth, III, Priscilla and her husband Ken Marks, Susan and her husband George Nagy, and Florence and her husband Jerrimey Schroeter; five great-grandchildren, Natalie Nagy, John and Thomas Marks, Gretchen and Cameron Northrop; and two nieces, Joyce Banta and Judy Blakeslee. She was predeceased by her daughter Jean Ellsworth Northrop and a grandson Alexander Northrop. Family and friend s are invited to a memorial service Saturday (Dec. 28), 2 p.m. in the First Church in Windsor Congregational. Burial will be at the convenience of the family in Palisado Cemetery, Windsor. There are no calling hours. Contributions may be made to the Scholarship Fund of the First Church, 107 Palisado Ave., Windsor, 06095. The Carmon Windsor Funeral Home is caring for the arrangements.

b. 16 March 1930
Florence Yvonne Holcombe was born on 16 March 1930 at WaKeeney, Trego Co., KS. She was the daughter of Carl David Holcombe and Florence Peckham.

Mr. Loomis was born Nov. 16, 1934, in New Haven, and lived in Orange and West Haven until his retirement to Florida in 2010. He was married to his childhood sweetheart, Shirley Trask Loomis, for 56 years. He attended Mary L. Tracy, Hillhouse, and graduated from UConn with a master's degree in forestry. He graduated the Coastguard Officer Candidate School in 1957 and served five years and left as lieutenant commander. He entered the Army Reserves in 1975 and retired a major in 1998.

Mr. Loomis owned and operated E.G. Loomis & Son Inc. in Orange until 1989. He worked for Connecticut Central Railroad until 1998. He also worked for Railroad Salvage and BDN Landscaping before going to work for Mirror Polishing & Plating Company Inc. in Waterbury from 1998 until his retirement in December of 2010. He owned and operated Loomis Bus Company for Amity Regional bus system. While in Florida, Mr. Loomis worked five seasons for the Houston Astros Spring Training Facility as a security guard in Osceola, Fla.

Mr. Loomis was a 56-year member of Wooster Lodge No. 79 Masonic Order and served as Worshipful Master twice, and he was a member of the National Sojourners. He was a past Patron of Mystic Chapter No. 20 OES and was a 50+-year member of Orange Congregational Church of Orange. He was a retired member of the Orange Volunteer Fire Department and was a life member of Connecticut Valley Railroad Museum. Mr. Loomis was also an avid stamp and coin collector and enjoyed model railroads and anything railroad related.

Friends may visit with Mr. Loomis' family on Tuesday, Oct. 15, from 6 to 9 p.m. at Beecher & Bennett-Taylor Funeral Home, 410 Campbell Ave., West Haven. A funeral service will take place on Wednesday, Oct. 16, at 10 a.m. in the Orange Congregational Church, 205 Meetinghouse Lane, Orange, followed by a burial with military honors in Orange Center Cemetery.

Ernest G. was enumerated in the 1900 Manchester, Hillsborough Co., NH, federal census, in the household of his father, Joseph T. Loomis, born in Jul 1856 in MA. Joseph Loomis' father was from England.

Burt was enumerated in the 1910 Watertown, Jefferson Co., NY federal census in the household of his father Elam. He was a divorced machinist age 28.

Burt and Agnes were enumertated in the 1920 Bristol, Hartford Co., CT, federal census. He was a machinist age 36, she was 33. Also in the household was Morris Root, 48, brother-in-law.

Burt was enumerated in the 1930 Watertown, Jefferson Co., NY, federal census in the household of his widowed mother Julia. He was a widowed machinist age 48.

b. 1869
Bert Henry Giles was born in 1869. He married Alice Cornelia Holcombe, daughter of Elam Lysander Holcombe and Julia Frances McConnell, on 17 June 1896.

b. circa 1873
Eva Holcombe was born circa 1873. She was the daughter of John P. Holcombe and Hattie Hassett.

Fred was enumerated in the 1875 Watertown, Jefferson Co., NY state census in the household of his grandparents, Eugene and Mary Blanc.

Fred and Sarah were enumerated in the 1900 Watertown, Jefferson Co., NY, federal census. He was a telegraph operator age 29, she was 32. The only child in the household was Fred B. Jr. 1. Also in the household were Eva Millen and Frank C. Knapp.

Sarah was again enumerated in Watertown in the 1920 federal census. Children in the household were Floyd 19, and Thelma 17.