Jasper and Flora resided at Sheldon, N. Y., to which place they removed in March, 1818, with her parents. Flora had no children by her second marriage.2

Theophilus and Maria lived in Bloomington, Ill; had no children. He was a merchant; --was an influential and welathy citizen.2

Children of Cynthia Humphrey and Charles B. Street

Eli was a school teacher a number of years; was also a farmer. He held the offices of Town Superintendent of Schools, Town Assessor, and Justice of the Peace.2

James and Diana resided in Sheldon and East Aurora, NY. Diana died in Leroy while on a visit to her brother Theophilus.2

Wolcott and Amanda had no children. He was a farmer, tanner, and merchant; was President of the National Bank of Warsaw, N.Y., for sixteen years.2

When twenty years of age, Mr. Humphrey entered the New York State Militia; in 1840, was elected Colonel of the 9th Regiment, 8th Brigade, N. Y. State Artillery; resigned in 1844. He held various town offices; in 1850, was Census Marshal in six of the towns of his county; in 1849, '53, and '60, was Postmaster, which position he resigned. In 1850, he was elected to the New York Assembly, and was returned to the same in 1851, --his political talents and constant activity giving him a leading position in that body. He was Chairman of the Committee on Railroads, and reported the Central R. R. Bill, authorizing the railroad consolidation and establishing the existing restrictions. He was also selected, by caucus, to take charge of the Prohibitory Liquor Law passed at that session, and made an able speech in its behalf. In 1855, he removed to Bloomington, Ill., whee he was instrumental in securing the return of the late Owen Lovejoy to Congress, against Judge Davies. After a three years' residence there, he returned and resumed business at North Java, N. Y., from which place he removed, in 1864, to Warsaw, Wyoming Co., N. Y. where he resided in 1884. During the war, he was enrolling officer for the U. S. Government, and was mobbed while in discharge of his duties.2

Hon. W. J. Humphrey served two terms in the New York Senate; was first elected, in 1865, from the 30th District (Wyoming, Livingston and Allegany Counties), by 5,240 majority, over the late Judge Hastings, of Livingston; and became a member of Committees on R. R., Internal Affairs and Printing, and Chairman of the Committee on Roads and Bridges. In the session of 1868, he was Chairman of the Committee on Commerce and Navigation, a member of the Finance Committee, and Chairman of the Committee on a joint Library. He was a faithful and indefatigable worker, a good debater, and possessed fine talents as a political organizer; was a whig, so long as that party existed, and then a republican. He was a gentleman of fine presence, great nervous energy, warm friendships and good impulses.2

George enlisted in the Union army during the war of the Rebellion, and died while in the service.1

Harlow married an has children. He is the Postmaster (1884).2

b. August 1828
Minerva Street was born in August 1828. She was the daughter of Charles B. Street and Cynthia Humphrey.

Minerva and her husband resided in Godfrey, Ill.2 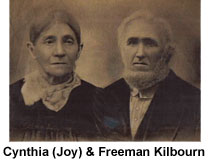 copyright Laura Bryan
Cynthia Joy was born on 2 February 1826 at Tioga, Danby Co., NY.1 She was the daughter of Alvah Joy and Tirzah Humphrey.1 Cynthia Joy died on 29 March 1903 at age 77.


Tinnie D'Etta Hewett was educated at Oberlin College in Ohio, and graduated in 1888. In 1890 she became a missionary in China and on Oct. 25, 1892 she married James Brettle Thompson in Tientsin, China. James Thompson was also a graduate of Oberlin College and had set out on Wesleyan missionary work in 1885. James was not an American at that time as he was born 1861 in Harbour Grace, Newfoundland, a dominion of Britain, and was a British citizen. His parents and their siblings had emigrated from Yorkshire in 1829, and the family at large enjoyed a very prominent status as professionals, doctors, and politicians. The genealogy of the Thompson family is fairly extensive throughout Newfoundland and northern Britain, and includes a few notable persons of some historic interest in Canada.

Tinnie and James had 3 children, the third of which resulted in the death of Tinnie during childbirth in 1897 in Shansi, China. The children were all born in China presumably, namely Ada, Marian, and Ethyl. I believe Tinnie died giving birth to Ethyl, but it was Ada that died that same year. The couple had actually returned to the United States in 1895 to seek treatment for complications from an earlier birth, and returned to China the year of her death. After Tinnie's death, a rather distraught James resigned missionary work and returned to Newfoundland where he was employed by his brother for a short time before moving to the United States. Probably a good move on his part; a short time after he'd left, the Boxer rebellion brought about the murder of all of their colleagues in China.

His purpose in the United states after the turn of the century and the fate of his 2 children are not known, but we do know he died in Minneapolis on April 10, 1932. I would think that by this time he must have become an American citizen. Other Americans in his genealogy that we are aware of are his uncle William R. Thompson of New York (formerly of Yorkshire, Eng.), and an extensive collection of Thompsons in New Hampshire and Massachussetts resulting from the emigration of his nephew, Archibald Thompson.