Vernon B. King was the son of Elihue King and Lydia Moore.

Henry Herman Warner was the son of Jonathan T. Warner and Mary Trenkenshuk.

Richard Roberts notes that Lydia is said by Elias Loomis to have married Abijah abcock but the Lebanon Vital Records show him as marrying Lydia "Ladd" on 11 April 1780. It appears that she perhaps married first Nathaniel Ladd who died 22 February 1779, age 33, and who is buried near Jonathan and Capt. John Loomis in the Silver Street Cemetery. Abijah Babcock's first wife was Mary Loomis, daughter of Capt. Israel and Esther (Hunt) Loomis who dide on 22 October 1777 at Lebanon. Abijah and Mary were married on 18 May 1771 at Lebanon. Abijah and both of his wives are buried in teh Old Cemetery, Lebanon.1 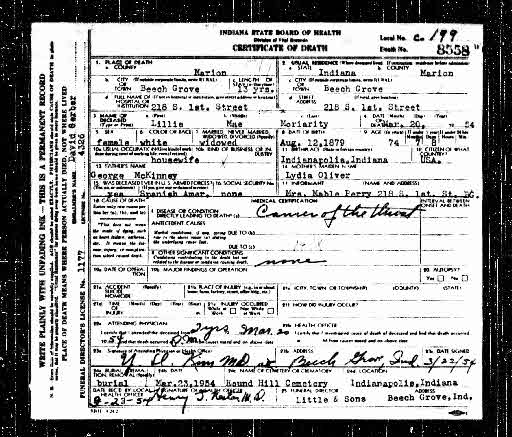 George and Eliza "MacKinney" were enumerated in the 1900 Indianapolis, Marion Co., IN, federal census. He was a laborer, age 66, she was 39; they had been married 23 years; she had 12 children, 8 still living. Both of George's parents were from Pennsylvania. Children in the household were Roscoe 19, Stanton 17, Leroy 14, Charles 10, Thomas 7, Earl 4, son-in-law Earl Roberts 24, daughter Lillie Roberts 21, and granddaughter Mabel 10 months.

The 1910 Indianapolis federal census has no mention of any family member other than Roscoe. There was an Earl McKinney in an orphanage.

b. July 1898
Donnie Holcombe was born in July 1898.1 He was the son of William Ellis Holcombe and Lydia Frances Elizabeth Legg.1