Marilla Converse Cudworth was the daughter of Hiram Newton Cudworth and Kate Maria Babbitt. From notes with photographs. 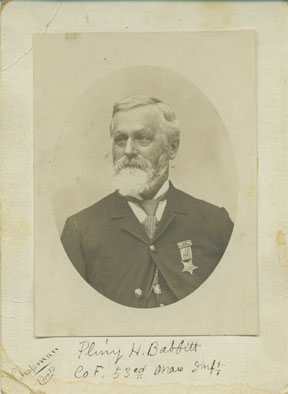 Pliny's early days were passed on the farm attending the district school. Later he atended Monson & Shelburne Falls' Academies. He finished his limited and hard earned education at Appleton Academy, New Ipswich, NH. It was there that he met Lydia.

During his time of service he was detailed to various important duties, among them being assistant commissary on the "Continental" carrying supplies to New orleans. After expiration of service he returned to Barre, but was later called to Washington, where for a year he was recruiting officer. 2

Returning to Barre he resumed his previous lines of business. He was honored by hi stownsmen with various offices. Was Constable or Deputy Sheriff for mearly seventy years. His advice was frequently sought and he always proved a good counsellor. He was much interested in the affairs of the town, especially in the church and schools, and did much to stimulate their growth and prosperity. An active, sueful and patriotic citizen, as well as a kind and indulgent husband and father. His finetieth birthday was celebrated in Barre shortly before his death. All his children and grandchildren being present. 2

Pliiny was enumerated in the 1900 Barre, Worcester Co., MA, federal census, in the household of son-in-law, Harding Jenkins. He was a widower, age 81.

The Babbitt genealogy lists 8 children of Pliny and Lydia, including twins that died young.

d. 30 August 1891
From the account of the death of Marilla Theresa Converse. Harrison Wyman Deacon died on 30 August 1891 at Hubbardston, MA.

During World War II Percy served in the United States Navy 1942-1945 with the rank of Lieutenant. He was a member of the Mobile Carnival Court of 1936; King of Carnival, 1939; and was a member of other Mystic societies; the Bachelors; the Mobile Country Club; the Jaycees; and the Kiwanis Club. He was a member of the First Baptist Church of Mobile. On December 18, 1943, he married Rebecca Buck of Mobile and their children are Percy Coleman Fountain, Jr. and John Ernst Fountain.
P.C. served on the Ticket Committee for several years prior to his death in 1956. Also he served for several years as Demon and was especially skillful in that capacity. With his suave court-room abilities as a prosecutor, his subtle showmanship and quick wit, it was woe to his target and much amusement for those present.